Home favourite Rosberg, who is six points behind Hamilton in the title race, will now head into qualifying later on Saturday having topped all three practice sessions at Hockenheim.

Hamilton insisted he needed to get his act together overnight after finishing a distant second to his Mercedes team-mate in both practice sessions on Friday.

And while Hamilton was just 0.057 seconds slower than Rosberg in the final session, it is the German who will start qualifying as the favourite to convert his promising practice form into his second pole position in as many races.

Hamilton also faces an investigation from the stewards after Haas driver Romain Grosjean had to stop in the pit lane to avoid the British driver.

Hamilton already has two reprimands to his name this season, and a third will see him issued with an automatic 10-place grid drop for Sunday's race.

Mercedes, who have won all but one of the opening 11 races this season, were comfortably faster than the rest of the field on Friday.

But both Red Bull and Ferrari are likely to buoyed by their form here with Daniel Ricciardo just 0.099 seconds slower than Rosberg's best lap. The Ferrari duo of Kimi Raikkonen and Sebastian Vettel were fourth and fifth respectively with Max Verstappen sixth in the other Red Bull.

Elsewhere, Fernando Alonso was ninth for McLaren while his team-mate Jenson Button appeared to be struggling with the handling of his car and was only 19th in the order.

After being summoned to the stewards, Mercedes were fined E10,000 for an unsafe release during final practice, but Hamilton avoided a reprimand. 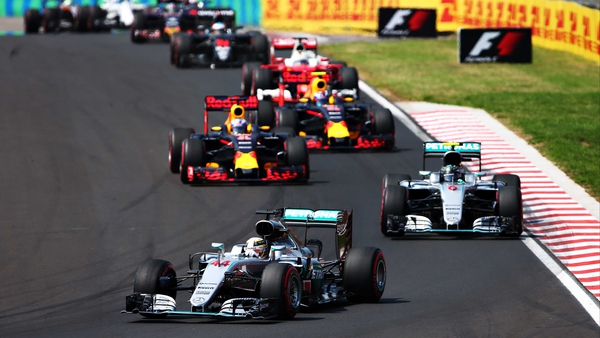