Sebastien Ogier will take a 17.1-second lead into the final day of the Rally of Sweden after holding off the challenge of closest rival Hayden Paddon.

World champion Ogier had opened up a 26.9-second gap in Friday's opening leg despite hitting a tree and although New Zealander Paddon carved into his advantage in Saturday's snowy forest speed tests, the Frenchman kept him at bay.

Heavy overnight snow saw road opener Ogier plough a clean line for those cars behind him and Paddon, on his debut in Hyundai's 2016-specification i20, took full advantage to pile on the pressure.

Ogier, who won Rallye Monte Carlo last month, went fastest in the opening speed test in his Volkswagen Polo R to lead by more than half a minute, but in the following test Paddon cut the deficit to 8.8 seconds.

Ogier then regained vital seconds in the final three tests despite a hair-raising sideways slide in the penultimate stage.

"I was completely flat out," Ogier said.

"I took so many risks and couldn't have gone any faster."

Mads Ostberg, who flirted with a ditch in the opening stage, is lying third in his Ford Fiesta RS, 25.2 seconds behind Paddon.

Waterford’s Craig Breen is eighth after a strong debut in his Citroen DS 3. 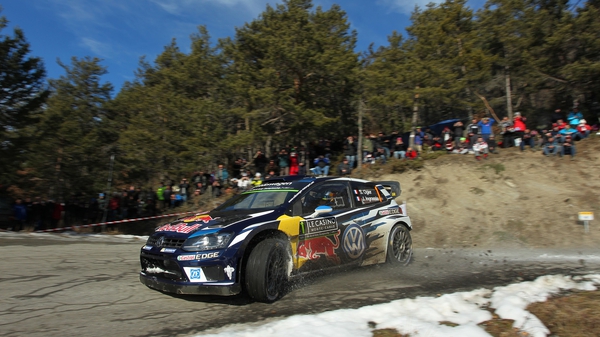