Spaniard Marquez will start on pole for the seventh time this season after the Repsol Honda man rounded the 5.1km circuit in one minute and 46.635 seconds, bettering the time of one minute and 47.187 seconds he set when topping the time sheets in qualifying last season.

He might have gone even better as he started his third run at blistering speed before losing it on the second turn, walking away unhurt from the accident.

Movistar Yamaha's Jorge Lorenzo, who is 23 points behind team-mate Valentino Rossi in the standings, had dominated final practice on Friday but had to settle for second place, 0.108 seconds off the pace as he was the only ride besides Marquez to complete a lap in under 1min 47secs.

Ducati Team's Andrea Iannone pulled out a surprising third place to complete the front row despite still experiencing pain from the shoulder he dislocated in a training accident. 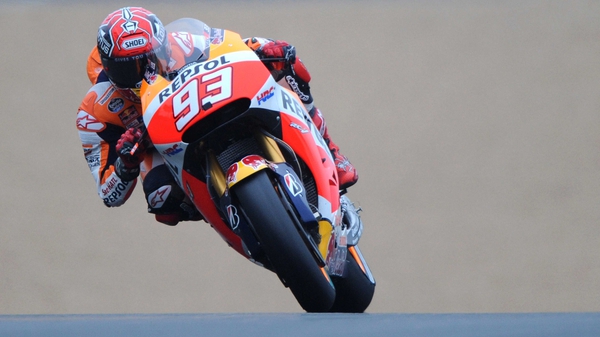