Marc Marquez smashed his own record to claim his sixth pole of the season for Sunday's British Grand Prix.

Repsol Honda's Marquez set the fastest ever lap by a motorcycle around the Silverstone circuit to take his 28th career MotoGP pole position.

The reigning world champion went under his 2013 pole record of two minutes 02.238 seconds on his very first lap to lay down a marker to the rest of the field.

The Spaniard then went even quicker on his second run to set a time of 2:00.234 to finish ahead of Jorge Lorenzo and Dani Pedrosa, with Valentino Rossi in fourth.

Lorenzo was 0.288 seconds down on Marquez with Pedrosa completing an all-Spanish front row.
Movistar Yamaha's Rossi improved his time from practice by over a second, but still found himself 0.4 seconds behind his team-mate and main title rival Lorenzo.

Monster Yamaha Tech 3's Pol Espargaro was the leading Satellite rider in fifth as he equalled his best qualifying performance of the season.

Espargaro's team-mate Bradley Smith had been third on the combined time sheets after the third practice session but he will start the race from the back of the second row as the leading British rider in sixth. 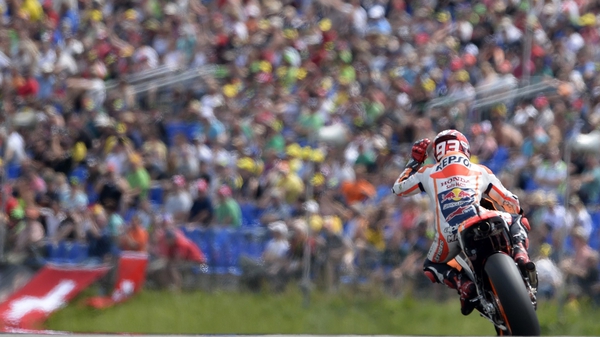