Home hopeful Jari-Matti Latvala will take a healthy 19.7-second cushion into the third stage of the Neste Oil Rally Finland.

The Volkswagen Motorsport Polo R driver increased his lead on team-mate Sebastian Ogier following Friday's four morning stages but had more than doubled that advantage by the end of the day.

Latvala went on to claim a hat-trick of stage wins in the afternoon, with Kris Meeke taking advantage of a poor showing from Ogier on loose surface gravel to move his Citroen DS3 into second place.

The Finn told WRC.com: "We pushed hard and took some really big risks. I felt relaxed and had a good feeling, and when I'm relaxed I normally do my best performance."

Ogier is 1.6secs behind Northern Irishman Meeke while Andreas Mikkelsen in his Polo R and Mads Ostberg, driving a DS3, complete the top five.

"It was a frustrating afternoon," Ogier admitted. "But I'm still happy with what I've done and happy to finish my sweeping role."

Another Finnish hope, Mikko Hirvonen, is 1.9secs adrift of Norway's Ostberg in his Ford Fiesta RS.

Robert Kubica, the former Formula One driver, crashed 1.6 kilometres into the opening test and damaged the suspension on his Fiesta RS. 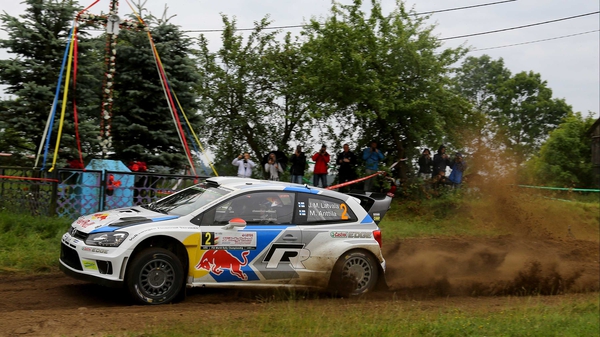 Jari-Matti Latvala leads after day one in Finland