Vettel ended the year as the first driver to win nine races in a row in a single season. His total of 13 for the championship equalled Schumacher's record 2004 haul with Ferrari.

"He won all those races, 13 this year; Mark Webber, he won none. That is pretty shocking," Schumacher said in a season review posted by the Mercedes team on You Tube on Friday.

Webber departed Formula One at the end of the season to join Porsche in endurance racing, with Australian compatriot Daniel Ricciardo replacing him.

Schumacher said he was happy for Vettel, the youngest quadruple champion at 26.

"If somebody can break all these records I prefer it to be him, than somebody else," added the German, who left the sport at the end of last season after coming out of retirement for three years with Mercedes.

Schumacher, who is good friends with Vettel and races with him in the annual race of Champions event as Team Germany,  said he had no regrets about his second retirement.

He felt Mercedes, who announced on Thursday that his old friend, ally and principal Ross Brawn was leaving at the end of the year, would be able to launch a real championship challenge in 2014.

"Everything now is there to have the base to fight the championship in the future. And that's what I think can happen," he said. 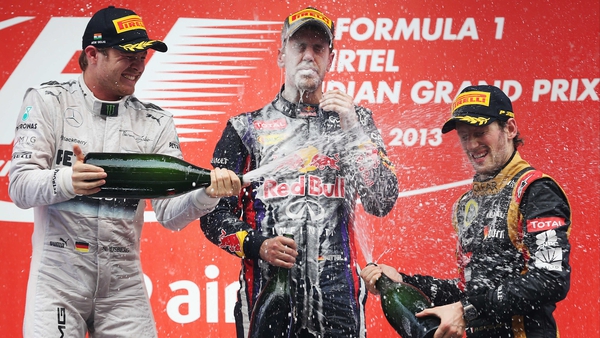 Sebastian Vettel does not see his domination as a bad thing