Sebastian Vettel became only the fourth man in history to win four Formula One drivers' titles by easing to a dominant victory in today's Indian Grand Prix.

The Red Bull driver led home by 30 seconds from the chasing pack to register his sixth win in succession and 10th overall in 2013, moving him into an unassailable 115-point lead in the standings with three races to spare.

Vettel's team-mate Mark Webber had been on target to make it a Red Bull one-two but a gearbox problem forced him out at two-thirds distance, paving the way for Mercedes' Nico Rosberg and Romain Grosjean of Lotus to complete the podium.

Vettel, who entered this weekend's race with a 90-point leader over Ferrari's Fernando Alonso and needing only to finish no lower than fifth to retain his title, drove a controlled race to secure a result that was never in doubt after Alonso was involved in a first-lap collision that wrecked his faint hopes and saw him finish 11th.

Vettel joins Alain Prost, Michael Schumacher and Juan Manuel Fangio as the sport's only four-time champions, and is only the third man - after Schumacher and Fangio - to claim four consecutively.

"To join people like Prost, Fangio and Michael is unbelievable" - Sebastian Vettel

At the age of just 26, Vettel is six years younger than Schumacher was when he became a four-time champion in 2001, and must surely fancy his chances of eclipsing his fellow German's outright record of seven world titles in the years to come.

Vettel's win also wrapped up the constructors' title for Red Bull and continued his dominance of a race he has made his own since it made its debut on the F1 calendar. 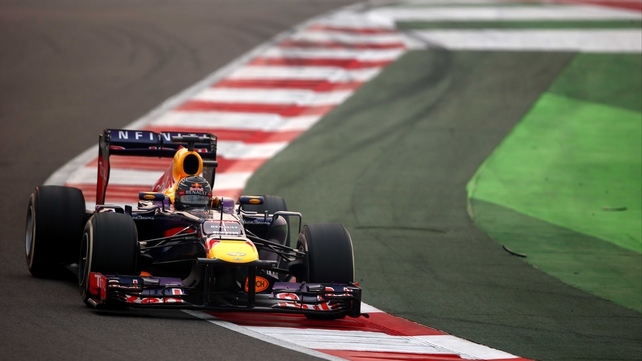 After winning the inaugural race in 2011, Vettel topped every practice session and qualifying on his way to victory in 2012 before repeating exactly the same trick this time around.

Red Bull team principal Christian Horner led the praise for Vettel's achievement over the team radio, telling his charge: "You've done it in style. You join the greats - well done."

Vettel also celebrated in style, turning doughnuts on the pit straight much to the delight of the main grandstand, before dropping to his knees and giving mock-praise to the all-conquering Red Bull RB9 that has seldom failed him during a dominant campaign.

Vettel has been booed when stepping on to podiums during the course of this season - presumed to be the legacy of his controversial decision to deny team orders on his way to victory in Malaysia this season - but in front of an enthused Indian crowd there was nothing but loud cheers to be heard as he mounted the top step.

Addressing the crowd after the podium ceremony, Vettel said: "It's been a phenomenal season. I think the spirit inside the team is so strong. It gives me so much pleasure to get in the car and go out for the guys and just try to give it all I have. The car was phenomenal today.

"It was phenomenal all season, to be honest, so I couldn't ask for more. I want to say a big thank you to the team, to all the people that were behind us.

"It was for sure not an easy season, even though people from the outside got the idea that we had it in our hands for quite a while, the last couple of races. I think it was a difficult one, all in all - very difficult for me, personally.

"To receive boos even though you haven't done anything wrong, but to overcome that and to give the right answer on the track and finally get that acceptance I think we're all looking for as racing drivers, it makes me very proud.

"To join people like Prost, Fangio and Michael is unbelievable." 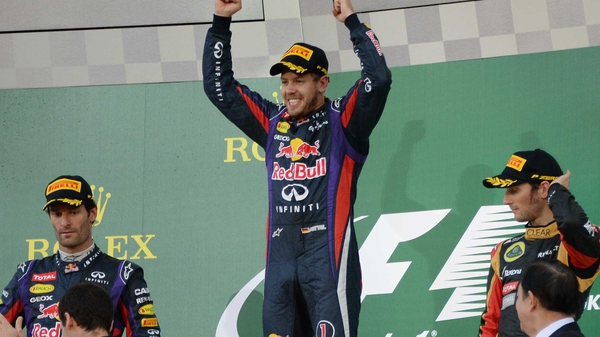