The Formula One world title champagne is on ice for Sebastian Vettel, despite the Red Bull driver claiming a personal best fifth consecutive victory this season.

Vettel made a two-stop strategy work to perfection around Suzuka to claim his fourth Japanese Grand Prix win in five years, spearheading a Red Bull one-two as Mark Webber claimed second just ahead of Romain Grosjean in his Lotus.

But with Fernando Alonso fourth in his Ferrari, it means the battle for the championship moves on to India in a fortnight's time as the 26-year-old German now has a 90-point cushion over the Spaniard.

For Vettel and Red Bull, their fourth consecutive titles now beckon in Delhi, with the latter 149 points ahead of Ferrari in a one-sided fight for the constructors' crown.

"I had a very poor start, I clipped my front wing and Lewis had a puncture" - Sebastian Vettel

"I had a very poor start, I clipped my front wing and Lewis had a puncture, but after that I looked after the tyres and had incredible pace, so overall fantastic. I'm so overwhelmed.

"As for the championship we have a good gap, so we'll still keep pushing. It looks good at this stage, but it's not over until it's over."

Webber, in his final year in F1, knows he had a chance of claiming a victory.

"The race was pretty good, although I'd like one more step on the podium," said Webber.

"Seb went longer in his first stint, and that made the difference, but I'm pretty happy with second. I got the best out of what I could." 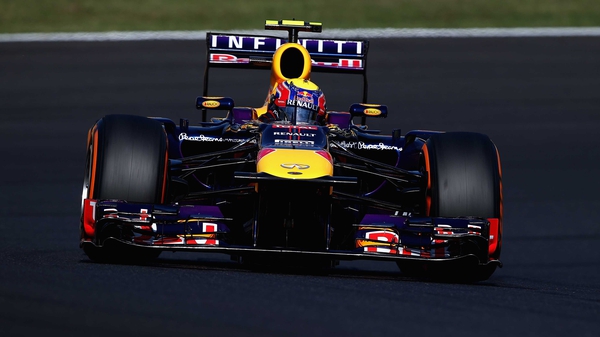