Sebastian Vettel stands potentially seven days away from becoming a four-time Formula One world champion after another cruise in Korea.

Despite two safety car periods, Vettel managed to keep his rivals at bay again to claim his third straight win at the Korea International Circuit, his fourth in a row this season and the 34th of his F1 career.

Vettel's closest title rival in Ferrari's Fernando Alonso could do no better than sixth, meaning there is now a 77-point gap between the 32 -year-old Spaniard and 26-year-old German.

Should Vettel win again and Alonso finish no higher than ninth in the Japanese Grand Prix next Sunday, it means the former can again crack open the title-winning champagne.

Vettel finished ahead of Lotus duo Kimi Raikkonen and Romain Grosjean who were split by just 0.7secs, with Sauber's Nico Hulkenberg fourth ahead of Mercedes' Lewis Hamilton, and then Alonso.

Needing to come under pressure for once at the start, it failed to materialise as Vettel made a predictably comfortable getaway.

Instead, on the fourth longest straight in F1 between turns one and two, it was second-on-the-grid Hamilton who had no answer to the man behind him in Grosjean.

Further joy followed for Vettel moments later at the sharp right-hand second corner as his nearest challenger in Alonso was involved in a tangle with team-mate Felipe Massa.

The Brazilian was sent into a small spin, dropping him to last as he waited for the rest of the field to file past him, whilst Alonso lost one place, dropping from fifth to sixth.

Through the first round of early pit stops - from laps six to 10 - the leading trio of Vettel, Grosjean and Hamilton were covered by around six seconds and a fight seemed on.

But then on lap 24 Hamilton's medium-compound rubber gave up the ghost, the Briton losing a staggering 16 seconds over six laps, dragging him back into the clutches of team-mate Nico Rosberg.

Just as Rosberg passed Hamilton, his front wing failed, the nose dipping on to the track and sending showers of sparks up into the air for the remainder of the lap before the German pitted for a new part. 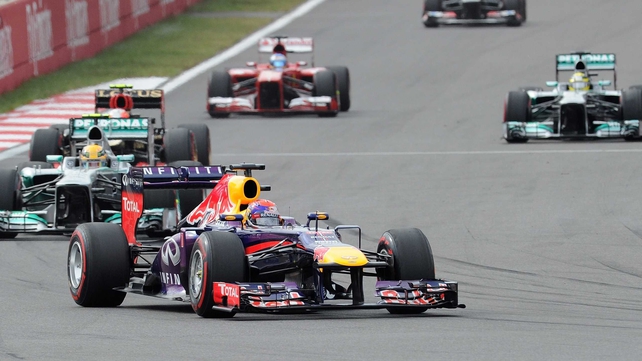 With Hamilton wondering why he was being forced to stay out on old and slow rubber he turned to the radio and said: "When are you going to bring me in guys? These tyres are f*****!"

It resulted in a crazy period of the race as Paul Di Resta then spun off, sliding his Force India into a barrier.

With his future in doubt, the Scot has now failed to see the flag for the last four races, and not scored in his last six overall.

A lap later and heading down the long straight between turns one and two, Sergio Perez suffered a high-speed delimitation of the front-right tyre on his McLaren, sending debris across the track and sparking a safety car.

That led to many drivers diving into the pits for their second stops and bunching up the field, with Vettel ahead of Grosjean, Raikkonen, Hamilton, Hulkenberg and Alonso at that stage.

Whilst the debris was cleared and the lapped cars unlapped themselves as per the regulations, the safety car stayed out for a total of five laps, leaving 19 to run to the chequered flag.

In the same corner, Adrian Sutil lost his Force India under braking, sliding into Mark Webber's Red Bull, with the latter retiring after his car caught fire.

With the marshals slow to react, and with plumes of black smoke swirling in the air, the safety car was again deployed.

However, as Vettel again led the field down the straight, cameras showed an unauthorised vehicle slowing the pack down, and not Bernd Maylander in the Mercedes road car, who was instead at the back.

After some confusion, and a clearly vexed look on the face of race director Charlie Whiting, the true safety car departed again after two laps and with 15 to go.

Although Raikkonen passed Grosjean, the Finn never came close to taking on Vettel, and whilst Hulkenberg, Hamilton and Alonso diced with one another behind, the running order stayed the same. 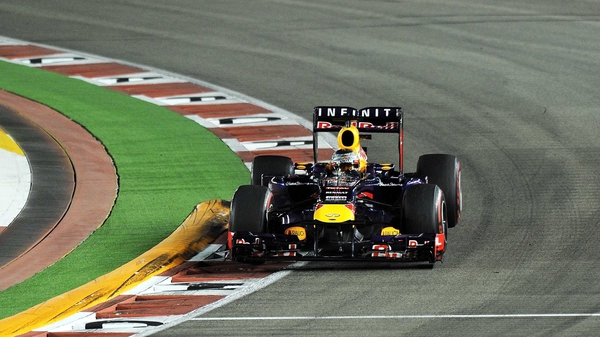