Sebastian Vettel was again in a class of his own as he completed a double hat-trick to further strengthen his grip on claiming a fourth successive Formula One world title.

In taking the chequered flag in Singapore for the third consecutive time under the lights of the Marina Bay Street Circuit, it was also Vettel's third straight win this season after recently triumphing in Belgium and Italy.

With Ferrari's Fernando Alonso second, the Spaniard is now 60 points adrift, with Lotus' Kimi Raikkonen 98 down after he clambered into the top three with a bad back and from 13th on the grid.

As for Mercedes' Lewis Hamilton, he could only finish fifth behind Mercedes team-mate Nico Rosberg to leave the Briton 96 points down on Vettel.

Booed again on the podium, Vettel said: "The start was quite hairy, I kept the inside clear, but Nico went in too deep (into turn one).

"It was a pleasure to drive it around this crazy track." - Sebastian Vettel

"I was able to get the place back, which was crucial because we had good pace, but then we had the safety car.

"After that again we had the pace, and the car was incredible, which doesn't happen by accident. It was a pleasure to drive it around this crazy track."

Despite his increasing gap to Alonso, Vettel added: "I'm not really looking at the championship too much, just enjoying the moment."

Alonso was thrilled with his second place as he said: "We knew we didn't have the pace, that we had to invent something, and the first opportunity was at the start.

"This is a fantastic podium, a second place that feels like a win.

"Red Bull were too fast all weekend, so we have to congratulate them for a fantastic weekend, and next we have to do better."

Raikkonen conceded his back issue did not affect him too much in the race, simply stating he and the team "did the best we could" under the circumstances. 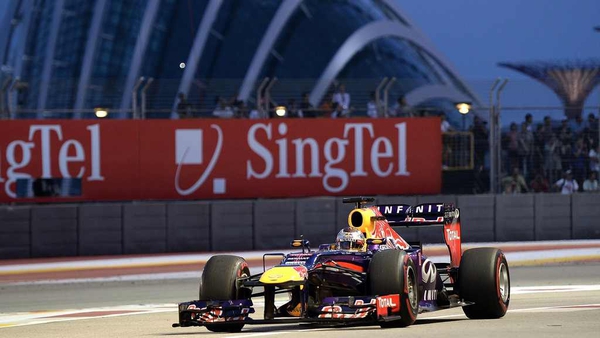