Jari-Matti Latvala will take a narrow lead into the final leg of the French Rally after Thierry Neuville suffered a punctured tyre this afternoon.

Neuville had held an advantage of 13.1 seconds in his Ford Fiesta RS heading into SS11, but lost almost 90secs and slipped down to fifth after his left-rear tyre hit a stone and deflated.

The Belgian's bad luck allowed Latvala and others to capitalise, and set up an enthralling final day with the top four drivers covered by only five seconds.

Latvala surged to the front in Saturday's final stage in his Volkswagen Polo R. The Finn finished 0.4secs clear of Dani Sordo (Citroen), 1.5secs ahead of new world champion Sebastien Ogier (VW) and with a 5secs cushion over nine-time champion Sebastien Loeb (Citroen).

Sordo shone on Saturday and held the lead courtesy of his third fastest time through Hohlandsbourg, but Latvala - who has yet to win a stage - gradually reeled in the Spaniard.

"It's incredible, the kind of fight we're having," Latvala said on wrc.com.

"It's one of the greatest rallies I have been involved in. I was perhaps too cautious on a couple of stages, but the main thing is I made no mistakes. I've dug out some little things that have been missing from my driving."

Loeb's bid to win his final WRC event suffered a minor setback when he lost 3.7s after he experienced understeer through the second of Saturday afternoon's tests, but he will nevertheless head into Sunday well placed.

The Frenchman, who earlier in the day secured a 900th career stage win, said: "It's so tight, such a tough fight.

"I tried to push hard all day but I wasn't always happy with the car, myself, everything. But we're still in the fight so it's not so bad." 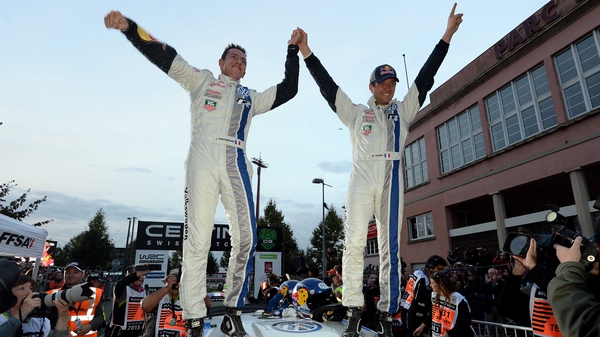