Sebastien Ogier wrapped up the World Rally Championship drivers' title after Dani Sordo's victory on the opening stage of the French Rally ended the faint hopes of Thierry Neuville.

Neuville, the only man with a chance of denying Ogier his maiden WRC crown, had to take the maximum three points on offer for winning the 4.55km Power Stage around the streets of Strasbourg but could only finish second behind the flying Sordo.

Frenchman Ogier, who finished third, was therefore able to celebrate winning his first world title before the 11th round of the season had even begun in earnest.

The drivers will hit the track on Friday for the second stage of the rally, but will do so with a man other than Sebastien Loeb as the reigning champion for the first time in a decade.

"I'm so happy," said Ogier, who is the first man other than Loeb to win the world title since Petter Solberg's championship year in 2003.

"Before the stage I was a bit confused about whether it would happen, but we're here and we managed to do it."

Ogier clambered on to the roof of his VW Polo to celebrate with fans who had lined the streets around Strasbourg's European Parliament building, and was quickly congratulated by Loeb, who this weekend is contesting his fourth and final round of the year after electing not to contest a full season in 2013.

For his part, Belgian driver Neuville was not surprised to see his outside title bid come to nothing.

"We knew already that we couldn't really win, so it doesn't change anything," he said.

"I hope to get one or two more points this weekend. Can I win? I don't know, we will try, but we want second in the championship more, so points are the priority." 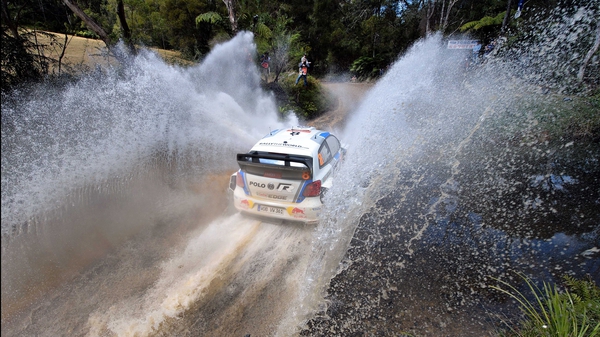