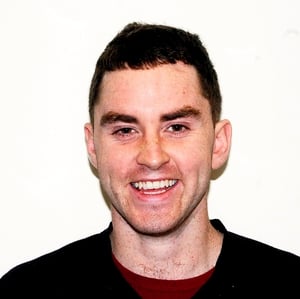 Rhys McKee had to battle through a cut brow to claim the Cage Warriors welterweight title on Saturday night at the SSE Arena, Belfast.

The Ballymena man stopped fellow highly touted welterweight Justin Burlinson with strikes in the third round after a thrilling back-and-forth affair.

Both men enjoyed spells of dominance in the first. McKee had the better of the action on the fight, landing consistent, heavy shots on the Englishman. However, towards the end of the round, Burlinson opened a gnarly cut across McKee's brow with heavy ground and pound.

After fighting off a leg lock attempt from Burlinson in the second round, McKee roared back into action, landing big shots from top position.

Burlinson failed on a takedown attempt early in the third, opening him up to the signature stopping power of Skeletor, who landed a brutal right-left combination to bring and end to the contest.

In the co-main event, Caolon Loughran set the Belfast crowd on fire with a second-round stoppage of Festus Ahorlu.

Loughran landed the cleaner shots in the first before taking the fight to the ground, threatening with a rear-naked choke. Returning the fight to the canvas in the second, the Tyrone bantamweight landed unanswered strikes from Ahorlu’s back, prompting the referee stopped the action.

The win saw the Team Kaobon pro improve to 6-0.

A huge win for The Don 👏 pic.twitter.com/96oqjT12ce

The Whitehall welterweight fought behind a tight jab for the majority of the clash, which stood to him as Causse threw caution to the wind at the end of the first.

Having exhausted his tank in the final fray of the opening round, Causse was taken down and stopped in the second as Sheehan rained down shots from top position.

The Andy Ryan gym went to 2-0 on the night with an earlier victory from Adam Darby securing a clean sweep for the Dublin team in Belfast.

After a back and forth round one, James Sheehan overcomes his opponent with strikes to get the finish.

From the first bell, Elliott used his wrestling to take away the striking base of Shelley. Although Elliott showed great prowess in taking the fight to the ground over the 15 minutes, Shelley remained active on the bottom, landing shots from close quarters.

The disappointment of the FAI team was evident when Shelley was announced the winner by split decision, with two of the three judges giving the Dubliner the edge for his action from closed guard.

Shelley improved his record to 5-0 with the win, with Elliott falling to 2-1.

On the undercard, a new generation of Irish professionals got their chance to impress in the signature yellow gloves of Cage Warriors.

Team Ryano’s Adam Darby took a comprehensive victory in the opening bout of the night. The towering striker impressively caught Dorian Cliucinicov with a stunning up-kick off a failed armbar attempt before bearing down on the Moldovan to claim an impressive first round win.

Almost had an up kick KO! #CW140 pic.twitter.com/VTOC9rbOTQ

Elsewhere, Team KF’s Adam Shelley was stopped in the second round by James Power after appearing to be excruciatingly close to securing a D’arce choke. Immediately after the attempt, Power came into the ascendancy, with the referee stopping the contest in the second round after the Englishman landed a flush knee.

Also on the preliminary portion of the card, Northern Irish middleweight Glenn Irvine returned to action for the first time in four years, taking a knockout loss to Cameroon’s Michael Tchamou. 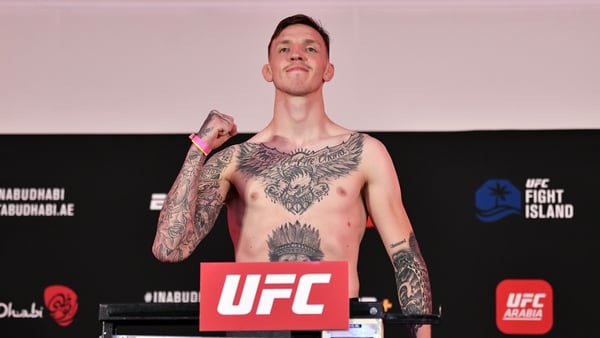 Rhys McKee's road back to the UFC runs through Belfast