Nate Diaz said he knew his hastily arranged bout with Conor McGregor gave him the "right place, right time" opportunity he absolutely had to seize after his seismic submission of the Dubliner in Las Vegas on Saturday night.

McGregor's professional debut at welterweight resulted in his first defeat in six years as Diaz locked in a choke hold in the second to force his opponent to tap out.

It left the heaving crowd at the MGM Grand stunned, but Diaz said afterwards that a bloody battle had played out exactly as he anticipated.

Speaking to Fox Sports, Diaz said: “It’s hard to hate, the guy did a great job. If I’m getting all that I’d be like, ‘sorry everybody, you should have been at the right place at the right time’. I got the chance to take that ‘right place right time’ and I took it as quickly as I could.

“Nothing surprised me. I knew I was going to start off slow. My plan was to not use anything in the first round and pick up as I go.

“He’s a good fighter but he’s where he’s at because of the push he’s getting. I know I’m a better fighter than him. They’ll want to bring him back to the top, but I knew I was better than him."

Much had been made of the 30-year-old's small window of preparation for such a huge fight - just 11 days, following the last-minute withdrawal of McGregor's original opponent Rafael dos Anjos - but the Californian insisted his physical condition is always finely tuned due to his relentless training habits.

"On my worst day I’ll train for two hours. I don’t have any hobbies; I’m always working, I’m always training. I’ll have a day when I’m eating junk food and pigging out and I’ll wake up and I’ll train the next day.

“As far as the hype and as much love as they’re giving this guy it’s the biggest fight for anybody. I feel bad, Frankie Edgar should have got that fight, but this is the way things worked out. I’ve got to take what I can get and ten days’ notice, five days, three days whatever. Everything I have I worked for." 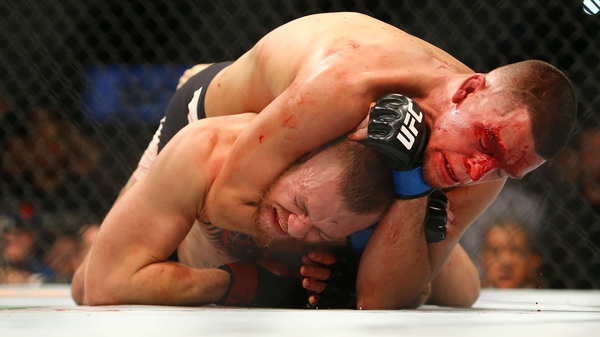