Ronda Rousey has revealed that she felt suicidal after her shock UFC defeat to Holly Holm last November.

The previously undefeated Rousey was a heavy favourite but lost her bantamweight title in dramatic fashion.

“Honestly, I was in the medical room and I was down in the corner,” an emotional Rousey said.

“I was sitting in the corner [thinking] ‘What am I anymore if I’m not this?’ I was literally sitting there and thinking about killing myself and that exact second, ‘I’m nothing... what do I do anymore and no one gives a sh*t about me anymore without this.’”

“To be honest, I looked up and I saw my man [fellow UFC fighter Travis Browne] was standing up there and I was like 'I need to have his babies. I need to stay alive'. I don’t know if I’d have made it without him.”

Rousey said that she has learned from the loss and that she still considered herself 'undefeated'.

"Maybe winning all the time isn't what’s best for everybody... maybe I had to be that example of picking myself up off the floor.

“I really do believe that I’m still undefeated because being defeated is a choice. Everybody has losses in their life but I choose to always be undefeated.”

Though there had been speculation after the reversal that she might never fight again, Rousey insists she wants a rematch at some point with Holm, who faces Miesha Tate on 5 March in the curtain-raiser to Conor McGregor v Rafael dos Anjos' lightweight title bout.

She added that she felt she may have overstretched herself prior to the defeat.

“I think the one thing that was different was that it was my third title fight in nine months and I don’t think anyone has ever attempted that before,” she said.

“Of course I want to fight Holly. I want to beat her.” 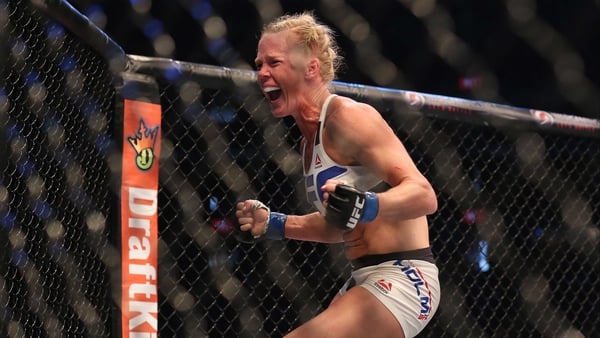