Donegal fighter Joseph Duffy has been forced to pull out of his headline fight with Dustin Poirier at UFC Dublin on Saturday night after suffering a mild concussion in training.

"Sorry to all my fans, friends and family who were planning to come and see me fight and who have supported me all the way."

Duffy is one of only two men, along with Artemij Sitenkov, to have defeated interim UFC featherweight champion Conor McGregor in an MMA bout.

Paddy Holohan v Louis Smolka will now be the headline bout but fans have been offered a refund if they are dissatisfied with the change.

A UFC statement said: "Due to a medical issue involving UFC lightweight Joe Duffy, the new main event of UFC FIGHT NIGHT in Ireland on Saturday will be a three-round bout featuring hometown hero Paddy Holohan vs. Louis Smolka.

"Having learned that Duffy received a strike to the head during training earlier this week, UFC sent him for medical tests in Ireland for precautionary purposes. The results determined that Duffy suffered a mild concussion and due to the proximity of the fight this Saturday UFC will not permit him to compete. The health and safety of UFC athletes will continue to be the top priority for the organization.

"As such, UFC has respected standard athletic commission regulations, which recommend a medical suspension from competition as a result of the concussion.

“Duffy’s original opponent, Dustin Poirier, will be rescheduled for another event. Fans seeking ticket refunds as a result of the main event changes can do so through Ticketmaster at the point of purchase.” 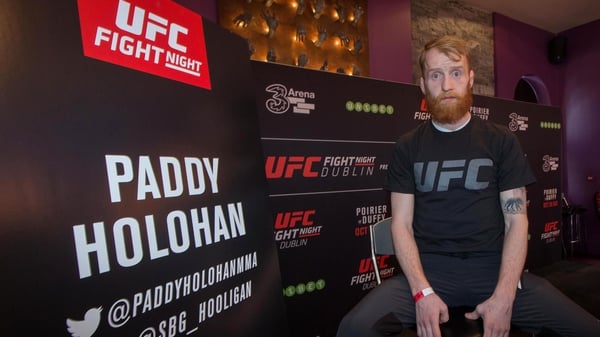