TV
Live on RTÉ1 and RTÉ Player from 2pm. Also live coverage on Sky Sports Arena from 2.30pm. Highlights on The Sunday Game on RTÉ2 at 9.30pm

RADIO
Live commentary on Sunday Sport on RTÉ Radio One.

Very warm and dry with long spells of sunshine. Highest temperatures of 22 to 28 degrees in a light south to southeast breeze. For more, see met.ie.

Kilkenny's chances of being back in an All-Ireland decider - their first in three years - didn't appear too hot back in May.

At the beginning of the year, there were rare whispers of dissension escaping out of Kilkenny, as folk wondered aloud whether the practice of simply rubber-stamping Brian Cody for another season every autumn might have had its day.

During the league - long ago universally recognised as a tedious irrelevance - Kilkenny attracted downbeat press, particularly in the wake of their Semple Stadium clash against Tipperary, which at the time was widely derided as a wretched game between middling teams who'd fallen a long way from the summit.

Their form in the Leinster round-robin was uneven and they lost two from three in the games it was possible for them to lose. While they doled out their regular Parnell Park hammering to the Dubs, they were flattered to lose by a single point to Galway in Salthill - albeit the late free which rescued the win for the hosts was heavily disputed - and then suffered a reversal at home to an inspired Wexford in the final group game, a result which could have had more consequences than it did.

Kilkenny's loss to Darragh Egan's side in Round 5 actually took their fate out of their hands and they were, momentarily, dependent on results elsewhere.

Fortunately for Cody and co, Galway always had a bit to spare against Dublin in the simultaneous match over in Salthill and so Kilkenny survived. Even a draw in Pearse Stadium and the Cats would have been watching the remainder of the championship on television. Not that they were too inclined to betray their gratitude to the westerners in the aftermath of the Leinster final.

The media wasn't inclined to dwell on Kilkenny's close shave, so fixated were they on the psychodrama involving Cody and the Galway manager. Post-match handshakes received more detailed analysis than Kilkenny's performances.

Kilkenny snuffed out Galway in June to win a third successive Leinster title, though this didn't set the Munster contenders quaking in their boots.

TJ Reid, back from his honeymoon and badly out of sorts in the round robin loss to Galway, was central, drilling over 0-12 from placed balls. Adrian Mullen, roaming around, zinged over 0-04 from play.

Full-back Huw Lawlor worked hard to limit Conor Whelan's influence, in so far as that was possible. Meanwhile, their new dogged corner-back terrier Mikey Butler was rewarded with the Man of the Match award, having rendered Cathal Mannion an irrelevance for much of the contest.

Still, they weren't fancied. Aside from the awkward handshake business, the main narrative afterwards centred on how poor the game was and the relative supremacy of Munster.

Amid an eerie atmosphere, in front of a Clare-centric crowd, Kilkenny devoured the Munster runners-up, essentially wrapping up the game by half-time.

All parts of their game were in perfect working order, their defenders dominating the skies, Reid, Mullen and Eoin Cody making hay up front. Kilkenny racked up 1-17 in the first half, registering just one wide in the process. Clare's, whose wide tally was stratospheric, had rustled up a miserable 0-06 by the break.

Butler's stock rose higher as then Hurler of the Year prospect Tony Kelly struggled to impact the game. Thee second half was a victory lap, Kilkenny winning at their leisure, Cody's face betraying deep satisfaction at the final whistle.

"They're in a lot better placed than they were last year," says Jackie Tyrrell. "But more importantly, they're now comfortable in a game that suits their needs and suits the players within it. And the players seem to know their roles. There's a lot of fluidity within the team as regarding movement and rotation of the forwards."

Limerick - three-in-a-row on line but doubts creeping in?

We're into the third year of the present decade, Limerick still yet to lose a championship match. The county's greatest ever team has already broken new ground by securing back-to-back All-Ireland successes in 2021.

Now, they have a chance to ascend to another plane by achieving the first three-in-a-row since the great Kilkenny side of the late noughties. Before that, one has to go to the Cork team of the late-70s

Their form hasn't quite been as imperious as in 2020 and 2021. On one level, there is little mystery behind this.

Cian Lynch, the brightest star in the firmament in last year's devastating All-Ireland final performance, has missed most of the campaign since traipsing off injured against Waterford. He returned to action late in the semi-final against Galway, understandably struggling to make an impact. Now, word emerges that a foot injury will rule him out of the decider altogether.

Peter Casey, who had 0-05 on the board before injuring his cruciate in last year's All-Ireland final, has also missed the entire season until the closing quarter of the Galway game.

Since brutally swatting aside Cork in the opening Munster round robin, Limerick have made comparatively heavy work of every game. Waterford pushed the champions to the brink in the Gaelic Grounds in Round 2, before their season abruptly went south. Tipperary, whose year was largely a write-off, were highly competitive until a late Limerick scoring blitz. Then there was the lengthy saga against Clare, the humdingers in Ennis and Thurles.

They were widely predicted to make light work of a Galway side, who'd only limped past a wasteful Cork in the quarters. Quite the opposite.

Henry Shefflin's side nosed in front as the game entered its final 10 minutes and but for wayward finishing in a ding-dong finish, might have ended Limerick's reign and ensured an unlikely repeat of the Leinster final.

Nonetheless, the Clare and Galway games, while unexpectedly competitive, showcased Limerick's composure in the closing stages, in particular their ability to patiently work scores under heavy pressure. Though Lynch and Casey's introductions attracted the biggest roar, it was David Reidy who proved the pivotal switch, the substitute swinging over three points in the tense finale.

While Gearóid Hegarty was uncharacteristically quiet in the semi, being withdrawn late on, Kyle Hayes was back to his imposing best. Their defence stood firm in the shaky finale, Sean Finn and Barry Nash winning aerial ball and using it wisely.

"I do think it's going to be a really close game, I don't understand how Limerick are so short," says Shane Dowling. "They're basing that on last year's form, not this year's form.

"Lucky to get over Galway, lucky to get past Clare in the Munster final. They haven't been humming all year like they had been. But the one thing that's impressed me is that when the game has got down to the nitty-gritty in the last couple of minutes, the composure and the belief that Limerick have is huge.

"I think it's going to go right to down to the wire, I'm hoping that bit of composure and know-how from the last couple of years will get them over the line, whereas maybe Kilkenny aren't at that stage yet."

The first All-Ireland senior hurling final to be played in mid-July arrives with a heat-warning from Met Éireann.

The weather forecasters are anticipating a hot spell beginning on Sunday which will persist into next week, with temperatures possibly rising into the 30s.

This has naturally raised the question of hydration, with water-breaks dispensed with after last season.

"Joe O'Connor, the strength and conditioning coach of the Limerick hurlers in 2018, said at a function the other day that the two places that you sweat the most are on the top of the head and the palm of your hands," observed Shane Dowling on the RTÉ GAA podcast.

"And he thinks it could be borderline dangerous. And the GAA common sense - does that even exist I wonder? - should say considering the conditions that we'll allow two Maor Uisces for both counties and they can throw in water bottles whenever they see fit. Something like that has to be done surely."

Kilkenny are aiming to bridge a seven-year gap to their last All-Ireland title - they ended a similar barren stretch for the first title of Cody's reign back in 2000, when captain Willie O'Connor announced, "for the last few years, this Cup wandered around and didn't know where it was going. Now it knows it's going home."

Of the Kilkenny players that featured in the semi-final against Clare, only four started for their most recent All-Ireland final victory in 2015 - Eoin Murphy, Padraig Walsh, TJ Reid and Walter Walsh. Richie Reid, centre-back against Clare, was unused sub in the 2015 final.

However, it should be noted that Richie Hogan and Cillian Buckley, while not involved in recent games, are still hovering around the squad...

Liam MacCarthy has made its home in Limerick for the last few years, and John Kiely's current crop are weighed down with silverware, at both provincial and All-Ireland level. Declan Hannon has the chance to make particular history, eclipsing Christy Ring by captaining a team to a fourth All-Ireland title.

Limerick were famously ambushed by Kilkenny in the 2019 All-Ireland semi-final, still their most recent defeat in the championship. John Kiely's side, without a game for some weeks after securing the Munster title, were slow from the blocks, the Cats built up an early advantage, which proved just about enough to see them through to the finish. The officials' failure to spot a deflection off a Kilkenny hurl when a last-gasp sideline cut drifted wide denied Limerick a shot at extra-time.

Their last final meeting, meanwhile, was in 2007, when Limerick made an unexpected raid to a first All-Ireland decider in 11 years. Kilkenny, alas, were close to their pomp and the Munster side were subject to an early blitzkrieg, which left them with a hopeless task. While Richie Bennis' side showed admirable resilience to stave off a hammering - unlike Waterford the following year - they still went down by seven in the end.

Since then, we've classics like the 2014 All-Ireland semi-final arm-wrestle in brutal rain - the Hill 16 crowd had to duck down into the bowels of the terrace early in the second half - and the 2018 quarter-final in Thurles, when Limerick recorded their first championship win over Kilkenny for 45 years.

One of the forgotten meetings is the Nowlan Park qualifier of 2017, panned as a low quality game, which brought an underwhelming end to John Kiely's first year in charge. Few then could have foreseen what was to come...

Follow the All-Ireland Hurling Championship final on Sunday, Limerick v Kilkenny, from 2pm via our live blogs on rte.ie/sport or on the RTÉ News app. Watch live coverage on RTÉ One and RTÉ Player with live radio commentary on RTÉ Radio 1 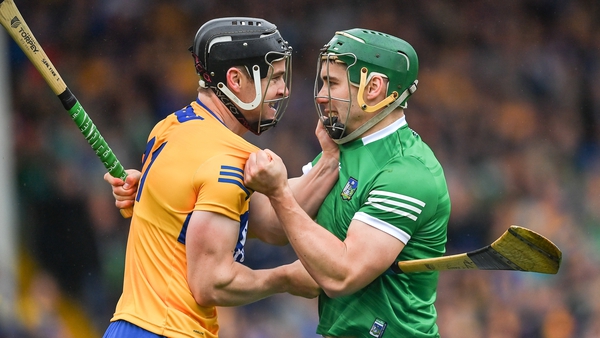