It was supposedly a semi-final weekend when Munster's higher standard of hurling would be confirmed.

But Brian Cody will lead Kilkenny into a 17th All-Ireland final after his superb Leinster champions trampled all over a fancied Banner outfit.

It was 1-17 to a pitiful 0-06 at half-time, Martin Keoghan’s goal rubbing salt in the wound of the 11 Clare shots hit off target under relentless defensive harassment all over the pitch.

The Cats dug their claws in further early in the second period when the excellent Cian Kenny (1-02) raised another green flag and though Clare didn’t give up, Shane O’Donnell (0-04) and David Fitzgerald (0-03) leading the resistance, the gap was now far too big and they never narrowed it closer than 10 points.

A season that promised so much ends in bitterly disappointing fashion for Clare. Kilkenny are one win away from a first All-Ireland title since 2015. They will take some beating.

Clare had far more of the underwhelming 39,626 crowd in attendance but were dealt a blow even before the throw-in when converted centre-back John Conlon was forced to withdraw with a back injury – he was replaced by Páidí Fitzpatrick, the Sixmilebridge man who only made his championship debut at 30 last year and hadn’t played a single minute of the five previous games this summer.

Fitzpatrick was under pressure straight away but he wasn’t alone in that – the first half quickly turned into a nightmare for Clare.

After an early TJ free and David Fitzgerald’s first, O’Donnell produced a lovely juggle and dummy to inch Clare ahead in the fifth minute. It was to be the only time they led in the entire game.

Reid was in inspired form as Kilkenny's constantly rotating forwards scored the next five to go 8-3 up after 16. Twice Conor Cleary won the ball in the air only for TJ to rob it off him and set up a team-mate for an easy point.

As well as two other assists, the 34-year-old dispatched four first-half frees, mostly won by Cian Kenny, and added a fine point from play after a trademark catch.

It was the Shamrocks show as his young clubmates Mullen and Cody filled their boots in the opening 35, scoring 0-04 and 0-03 respectively, one of Cody’s efforts following a fabulous piece of control where he brilliantly kept the ball in play near the sideline before slapping it off the ground to himself.

Diarmuid Ryan had a busy 21st minute, scoring twice in between conceding a free TJ converted, but he and Fitzgerald were the only Clare men to hit more than one from play in the opening period.

Butler was marking Kelly tighter than your favourite old jersey and Peter Duggan was equally as peripheral, managing just one free until he was substituted. Time and again, Clare fired long ball in on top of the isolated David Reidy or Ian Galvin for Huw Lawlor, Paddy Deegan and Tommy Walsh to mop up.

That was supposed to be Kilkenny's Achilles heel but they were mixing long deliveries with clever interplay and finding huge space in the Banner defence.

On the half-hour mark, another great catch from Reid set up Cody for a shot at goal across Eibhear Quilligan - the Clare netminder produced a super save to turn it away but Billy Ryan fired the loose ball over the bar and Kilkenny were ten points up, 0-15 to 0-05.

Billy Ryan scores a point for Kilkenny following a remarkable save from Clare goalkeeper Eibhear Quilligan.

Kelly finally got on the scoresheet after a couple of wayward frees but Reid again turned provider, for Padraig Walsh, who scored two points on his first start in three games.

Then, two pivotal moments. Fitzgerald broke clear with Aron Shanagher, an early sub for Galvin, on his right shoulder but the handpass was overhit.

In injury-time, Duggan wound up to shoot but Kilkenny captain Richie Reid made a superb block and Kilkenny cleared it downfield.

Rory Hayes took the ball out of a ruck but Ryan picked his pocket and Keoghan slapped the ball through the legs of the onrushing Quilligan, sweeping the deflected ball over the line in front of the stunned Clare masses on Hill 16.

A 14-point interval deficit suggested this game was already over – even remembering Clare's quarter-final rally and Waterford reeling in the Cats at this stage in 2020.

Clare went for it - they had no other choice - and hit four of the first six scores on the resumption: Ryan again, Hayes from his own half and David McInerney as defenders showed their team-mates how it was done.

But Billy Ryan had already fired a warning shot just over when the dagger was planted in the 43rd minute.

Keoghan’s goal hadn’t spared him the half-time hook and his replacement Walter Walsh soared above Diarmuid Ryan and put Kenny clean through with a perfect handpass.

The clubmate of Brian Cody made no mistake and there was 15 between them now.

Kilkenny's Cian Kenny delivers what would appear to be a fatal blow to Clare's All-Ireland hopes.

Clare came again, O’Donnell scoring two fine efforts from play and Fitzgerald notching his third to make it 2-21 to 0-17 with 15 to play. That was as good as it got.

O’Donnell was pinged for over-carrying shortly after and TJ Reid calmly slotted the free from his own 65 before Fitzgerald was twice blocked down when presented with a half-sight of goal. Any lingering notions of a comeback had been dispelled.

Into the final stretch and Fitzgerald had another shot turned away by Eoin Murphy, Kilkenny countered and Reid fired over the bar. Enjoying the space, he added another as the Cats eventually romped home by 12.

Clare will rue a colossal tally of 24 wides compared to Kilkenny’s nine but might also feel they emptied the tank against Limerick in Munster. Their wait for a final appearance will stretch to 10 years.

If Kilkenny can replicate this masterclass of clinical intensity in the decider they have a great chance of regaining Liam MacCarthy – whoever the opposition are. 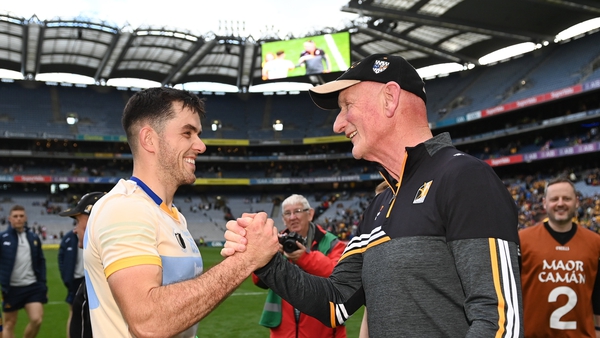