If you don't, you’re not alone. It appears most of the country’s hurling referees have forgotten it exists as well.

Sin-bins and penalties for the offence have been non-existent in this year’s championship – the latest apparent escape coming for Clare’s Cian Nolan when he got hold of Wexford’s Lee Chin in the closing stages of Saturday's All-Ireland quarter-final.

Referee Colm Lyons awarded a 20-metre free that Chin tapped over for a point but as his side were trailing by three, a penalty might have helped them to force extra-time.

Some have read this as a simple case of an official failing to apply the rule, others as a marginal call he got right. But there is a deeper problem here - the regulation is so vague as to be almost unenforceable.

It is over a year since we wrote, in the wake of James Owens being lambasted for awarding a penalty against Clare’s Aidan McCarthy, that nobody seemed to understand it. It’s still as clear as mud.

First of all, the referee has to decide if he thinks there was a goal chance that was prevented by the foul. On the live edition of The Sunday Game, co-commentator Michael Duignan thought Chin did have one but analysts Davy Fitzgerald and Joe Canning felt other Clare defenders running back meant he did not.

Second, the regulation now specifies – since the furore over McCarthy being punished for a foul near the sideline – that "as a rule of thumb" (seriously) a player should not be considered to have a goal chance unless he is not only inside the 20m but also further than 25 metres from the sideline.

On The Sunday Game highlights show, Ursula Jacob, Dónal Óg Cusack and Liam Sheedy all believed Chin had been professionally fouled but that Lyons may have thought he was too close to the sideline. They suggested adding lines to the pitch in time for the semi-finals rather than expecting referees to estimate the distance off the top of their heads.

The former Cork goalkeeper isn't the only member of the panel with strong views on this late incident during Clare's win over Wexford. #RTEGAA #TheSundayGame

So we already have two judgement calls – strength of opportunity and distance from the sideline – that referees are asked to weigh. But arguably the bigger issue is the narrow scope of fouls included in the rule. These are:

This explains why Tipperary’s Ronan Maher was not black-carded for a blatant jersey pull on Cork’s Patrick Horgan in the final week of the Munster round-robin. He couldn’t be. Pulling back an opponent doesn’t count, only pulling 'down’.

But what does pulling down mean exactly? Wrapping your arms around an opponent and taking them to the ground rugby style? Or should it also mean holding that then contributes to an opponent falling to the floor? If so, why should they have to fall to have it recognised as a foul?

So that brings us to the third reason Lyons may not have awarded a penalty – in real-time it first looked like Nolan had only pulled Chin’s arm. Which doesn’t count. Slow-motion replays showed he then also wrapped his left arm around the forward’s leg and brought him to his knees. Certainly more of a ‘pull down’ but much more difficult for the officials to spot, in what is a ridiculously fast-moving sport with no video review.

The intention with listing such a narrow range of fouls seems to have been to only punish ‘cynical’ offences, even though that word isn’t mentioned, rather than honest attempts to tackle that go awry. But the limited list, and the distance consideration, make it far harder for referees to implement it with confidence and almost all just go with the safer option of awarding a free. Defenders can also be coached to only foul in a way that doesn’t draw the stricter punishment.

The solution might be simply to do away with any distinction between fouls. If you deny a goal-scoring opportunity then it’s a penalty – full stop. An accidental foul has the same disruptive effect on an attacking player as a deliberate one. The black card could be downgraded to a yellow if that’s too much potential punishment that could be mistakenly awarded. Likewise, forget the 25m thing. The speed and ability of some forwards means they could easily cut inside and score if one on one on the sideline, and the referee already has discretion to decide if a goal was on or not.

Of course, rules that are ignored or unenforceable are far from a new phenomenon in the GAA.

Lee Chin did score two goals on Saturday but was probably fractionally in the square ahead of the ball for his first. But how is anybody supposed to simultaneously focus on a small ball falling from the sky and a player’s feet?

The widely overlooked four-step rule is another egregious example. The solution to that possibly lies within its wording (… or the time needed to take four steps) - making it a two-second possession rule instead could make more sense.

Both of these examples would require a deeper debate and agreeing a better alternative. But when it comes to the black-card rule, the simple fact is it is not doing what it was intended to and needs to be fixed at the soonest opportunity. Having it on the books as an empty gesture does nothing for a game that is at its most thrilling when green flags are flying. 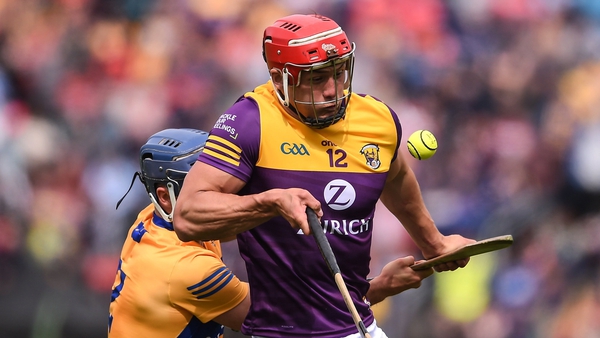