Former Limerick hurler Shane Dowling believes that the Treaty County's ability to flex their strength in depth against Waterford on Saturday sent out an ominous warning to the rest of the contenders in this year’s All-Ireland Championship.

John Kiely’s side already made history by going back-to-back for the first time in the county’s history in 2021, and they are warm favourites to complete a triple crown after seeing off Division 1 champions Waterford in the Munster Championship.

Although only three points separated the sides at full time after the Déise hit two late goals, the win came without Kyle Hayes, Peter Casey and Seamus Flanagan while current Hurler of the Year Cian Lynch lasted just nine minutes before pulling up with a hamstring injury.

"I think if they had won the game the way they won at the weekend with the four players, people would say we could be in for a hell of a game here in a couple of weeks’ time or whenever if they do happen to meet again," Dowling told the RTÉ GAA podcast.

"The fact that they were missing the numbers of players they were and still won was obviously very promising.

"The one thing I would say, and it just comes down to John and Paul Kinnerk and the work that they do on the training field, it obviously doesn’t matter what players really take to the pitch because they’re all doing the same thing.

"I know they all have their different skill levels or whatever but Cian was doing a role and they bring on Cathal O’Neill and he does the same role.

"Conor Boylan was in there from Na Piarsaigh. Okay he didn’t score, but he did exactly what that particular position, player, was to do. He interrupted, he got tackles, he won a couple of frees.

"It just doesn’t seem to matter who they have.

"Obviously you can’t deny that you’d put in a Kyle or a Peter or a Cian or a Seamus with the skill levels they have, but that’s obviously promising.

"I can see why people are all of a sudden where they may have thought Limerick were finished but now they're actually thinking hold on, they're far from finished and the hunger is still there."

While Waterford's confidence would have suffered by being unable to get the better of a weakened Limerick, Dowling feels that they still have the ability to regroup.

He said that Dessie Hutchison, who finished with five points from play, broke through an important personal psychological barrier, but warned that it would take a group attacking effort to fulfil their Liam MacCarthy ambitions this season.

"I rate Dessie Hutchison extremely highly, I think he’s class, but the last number of times Limerick have played Waterford Sean Finn has definitely got the better of him.

"I wouldn’t say that at the weekend. I thought Dessie, when they needed him, when Limerick were getting a run at them, he came up and got a number of points. He got one in the first half as well and he was very, very good.

"Stephen Bennett, it wasn’t his usual self or what we’re accustomed to over the last two seasons but that goal that Waterford got was a thing of beauty. The spray across 40 yards, runners, pop off the shoulder, it was some finish like.

"There is definitely room for improvement in some of their forwards who maybe didn’t play so well but Dessie definitely [did], and I think that’ll be a big thing for him as well.

"He now knows if do they meet Limerick down the road - if he didn’t play well again at the weekend or was held to a point or whatever he’d know that he maybe struggles against Limerick whereas now he’s saying 'maybe I’m up to something here.’" 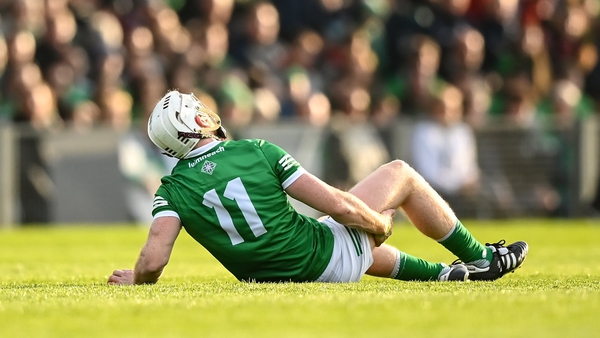 Limerick blow as Cian Lynch goes off injured against Waterford