Bon Jovi's "Keep The Faith" blared over the Tannoy at half-time as Tipperary headed to the dressing room with an unexpected yet deserved four-point lead.

The visitors, featuring four Championship debutants, had clearly ignored the pre-match tea leaves which had largely indicated a comfortable Waterford victory. Six minutes in and with four Port Láirge points on the scoreboard, such talk didn’t look too misplaced.

But Tipp full-forward Mark Kehoe sent the blue and gold flags flying high when finding the net after seven minutes, totally shifting the game’s momentum in the process.

A brace of Stephen Bennett frees inside 90 seconds eased Waterford nerves before Tipp landed a trio of points without reply from Forde (another free), Conor Bowe and Noel McGrath. McGrath’s next point was sandwiched between points at the opposite end for Dessie Hutchinson and Stephen Bennett (a free) to leave Tipp two clear after 24 minutes.

And had it not been for a brilliant Shaun O’Brien save in the 26th minute, denying Jason Forde what appeared to be a certain goal, Tipperary would have added to their lead. Michael Breen pointed from the rebound before Noel McGrath pointed again barely a minute later. By then, Tipperary were firmly in command, with Waterford relying on Stephen Bennett’s free taking to keep them in contention.

The Deisemen regained some level of composure in the closing minutes of the half, as points from Patrick Curran, Bennett and Shane McNulty left them trailing by 1-12 to 0-11. But there was no doubting the merits of Tipp’s advantage.

Waterford, with All Stars Austin Gleeson and Jamie Barron entering the fray at half-time, roared back into contention from the restart.

Stephen Bennett opened the scoring with another free before Gleeson found his range with an excellent point from wide on the right after 37 minutes.

That seven-point swing was stemmed by a converted free from Tipp goalkeeper Brian Hogan before Patrick Curran found his range again in the 43rd minute. Noel McGrath pointed just shy of the three-quarter hour mark before Waterford found the net again, with Dessie Hutchinson zipping the ball beyond the diving Hogan following Michael Kiely’s through ball.

Between two Bennett frees, Tipp substitute Dan McCormack found his range from the halfway line and when he struck again from a similar range after 50 minutes, Tipp’s arrears were reduced to five points.

Hutchinson and Forde traded points in the 55th and 56th minutes before Tipp roared back into the contest thanks to Mark Kehoe’s second goal after 57.

Jamie Barron tagged on his second point on the hour mark before Noel McGrath’s free left just a point between the sides.

Tipperary were left to rue opportunities missed down the stretch by Michael Breen, Mark Kehoe and Jake Morris, which was compounded by Austin Gleeson’s sidelined point in the 67th minute.

Noel McGrath’s second free a minute later left a point between the sides but it was Waterford who saw out this fixture in a gallop with points from Shane McNulty, Patrick Curran and Dessie Hutchinson securing a hard-earned win for the Deise. 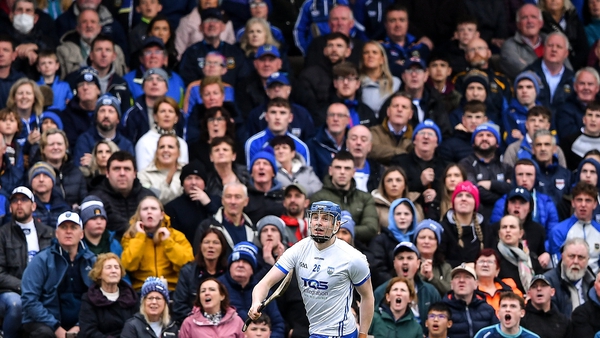