TJ Reid underlined his All Star credentials yet again with a match-winning tally of 1-09 at Croke Park as Kilkenny returned to a remarkable 14th All-Ireland hurling final under manager Brian Cody.

The Ballyhale man struck for the game's only goal after 17 minutes to give the holders a vital cushion and they would retain the lead from there until full-time.

The battling six-point win over Allianz League champions and Munster finalists Waterford secures Kilkenny a final clash with Tipperary or Galway next month.

They remain in line to secure back-to-back titles and continue to have inspirational leaders in Reid and Hurler of the Year Richie Hogan, who contributed 0-5 from play.

Maurice Shanahan led Waterford's challenge with a haul of 0-9 while Colin Dunford came into the game strongly in the second half, reducing the margin to just three points with a spree of scores.

But Kilkenny retained a strong kick for the finish line and two points from Hogan in the concluding stages as well as a couple from Ger Aylward kept them well in the clear.

Waterford played a typical tactical game - dropping an extra man into their defence to shore up the area.

It made for a tight, tense afternoon with both teams requiring the entire opening half to feel each other out and get to grips with the fortified defences.

In truth, inspiration was thin on the ground initially with the majority of first-half scores coming from placed balls. All that separated them at the break was a touch of class from Reid whose goal helped Kilkenny to lead 1-9 to 0-10 at half-time.

It was a quality strike as the All Star forward outfought Barry Coughlan and Tadhg de Burca to a high ball in and spun away before planting a low shot across goals to the bottom left corner.

It put Kilkenny 1-3 to 0-3 up after an evenly contested opening quarter and the strike kept them in front for the remainder of the half and indeed the game.

Reid scored a 1-7 in the first half alone and consistently punished Waterford for conceding frees in the scoring zone.

He had a 100 per cent record from six frees and added a neat score from open play. Scores were that bit harder for Waterford to come by and they required several moments of excellence just to split the posts.

Austin Gleeson's sideline conversion after eight minutes was a beauty while Shanahan nailed five points from placed balls including a couple of monster efforts.

Kilkenny restarted the second half strongly and outscored Waterford 0-5 to 0-2 in the third quarter to stretch their lead to five.

It was ominous viewing for the 41,122 crowd who looked on as the Cats held on to at least a three-point throughout the entire second-half.

Dunford did most to push Kilkenny and fired over four excellent points but they needed a goal to stand any chance of a famous win and a first final appearance since 2008. It never arrived. 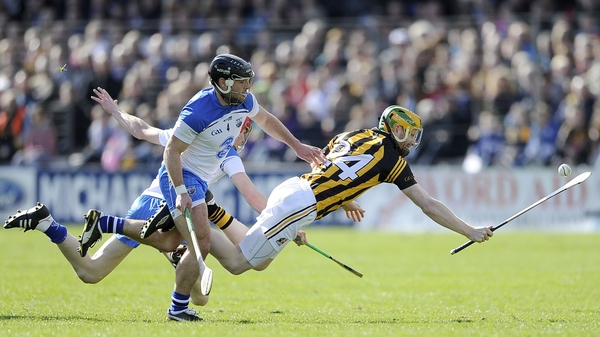