Clare SHC champions Cratloe have booked an AIB Munster semi-final date with the Tipperary champions, while Cushendall claimed a six-point win to advance to the Ulster final.

Conor McGrath delivered a Man of the Match performance as Cratloe claimed a 3-07 to 1-10 win over former Munster SHC champions Ballygunner in tough weather conditions at Walsh Park.

McGrath bagged 2-04 in a game which Cratloe never trailed, with Ballygunner reduced to 14 men after 47 minutes following the dismissal of Brian O’Sullivan.

Aided by a stiff wind on a tough afternoon for hurling, McGrath opened the Cratloe account after just four minutes and although Pauric Mahony levelled the tie two minutes later, the first goal from McGrath handed Cratloe a lead the Clare men wouldn’t relinquish.

He followed up with Cratloe’s second goal inside five minutes, with Cratloe pushing 2-02 to 0-01 ahead by the end of the first quarter.

All but two points of Cratloe’s 2-04 first half tally came from the stick of McGrath, with Gearoid Considine and David Collins also on target, as they claimed a 2-04 to 0-02 interval lead.

Ballygunner cut an eight-point interval deficit to just one 13 minutes into second half, but a second yellow card for corner forward O’Sullivan left the Waterford champions on the back foot.

The sides traded four points over the next four minutes, but a kicked goal from Cathal McInerney eight minutes from the end put Cratloe in the driving seat.

Ballygunner pushed hard with late points from Mahony and JJ Hutchinson, but it was Cratloe which booked a Munster semi-final date with either Loughmore-Castleiney or Thurles Sarsfields, who contest the Tipperary final next weekend.

Nine-time Ulster SHC champions Cushendall advanced to their first final since 2008 at the second attempt with a 2-10 to 0-10 semi-final replay win over Slaughtneil at Loughgiel.

A 28th minute goal from Karl McKeegan helped the Antrim side to a 1-04 to 0-03 half-time lead after a keenly contested opening 30 minutes.

Oisin O’Doherty and Neil McManus traded early points and although Cushendall stretched their lead to a 0-04 to 0-01 scoreline after 19 minutes, Slaughtneil fought back before the break.

Scores from Brendan Rogers and Gareth O’Kane cut the gap to the minimum but then McKeegan’s goal opened up a four-point at the interval.

Slaughtneil outscored their opponents by 0-02 to 0-01 inside 10 minutes of the restart, however, a McManus penalty goal for Cushendall ensured a five-point lead in the 39th minute

Both sides were well balanced in the closing quarter, but Cushendall stood firm to hold out with second-half substitute Shane McNaughton hitting two key points late on.

Cushendall will now face Down champions Portaferry in the final next Sunday.

Meanwhile in county final action, Shelmaliers claimed Wexford honours after a 3-08 to 1-11 replay win over St Anne's at Wexford Park.

Joe Kelly scored two goals for Shelmailers who will meet Offaly champions Kilcormac/Killoughey in the Leinster Club championship next weekend. 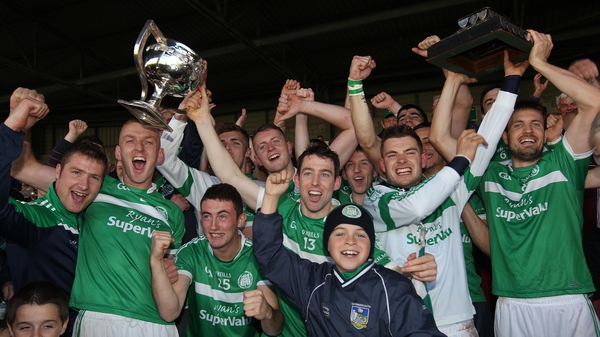