Kilmallock lifted the Limerick title after a 1-15 to 0-14 victory over 2013 champions Na Piarsaigh at the Gaelic Grounds.

Kilmallock were well in control by half-time, leading 1-09 to 0-05, but were down to 14-men following Liam Walsh’s dismissal just before the break.

Kilmallock suffered another sending off with just one minute left of the match, but by that time they had survived Na Piarsaigh’s man-advantage fight back to still lead 1-15 to 1-13.

Defending Offaly champions Kilcormac/Killoughey secured their third title in succession with a comfortable 2-18 to 1-09 win over St Rynagh’s in O’Connor Park, Tullamore.

Conor Mahon grabbed an early goal to give the champions a 1-02 lead after just three minutes. However, Joey O’Connor netted for St Rynagh’s just before the interval to leave the scores 1-09 to 1-07 in Kilcormac’s favour at the break.

An early second half Dan Curram's goal stretched the lead making the score 2-10 to 1-07, and Kilcormac pulled away at that stage to rattle over another eight points to St Rynagh’s meagre tally of two for the remainder of the game.

In Wexford, St Anne’s and Shelmailers ended in stalemate and will have to replay after a thrilling, close encounter at Wexford Park.

The scores finished St Anne’s 1-10 Shelmailers 0-13 after Ciaran O’Shaughnessy pointed  for Shelmailers in the last minute to level the scores.

St Anne’s held a narrow one-point lead at half-time with the scores 1-03 to 0-05 before Joe Kelly’s ‘65 levelled matters two minutes into the second period.

The sides exchanged scores before another Kelly point on 40mins opened a gap with Shelmailers leading 0-09 to 1-04.

St Anne’s had a two-point lead, 1-10 to 0-11, with four minutes left before another Kelly point cut the deficit to one, before O’Shaughnessy grabbed the draw.

In Westmeath, Raharney lifted the title for the 12th time in their history with a 2-12 to 1-09 win over Castlepollard at Cusack Park.

St Mullin’s are Carlow champions after beating Naomh Eoin 0-09 to 0-07 at Dr Cullen Park, while St Mary’s eased to the Leitrim title with a 3-20 to 0-07 thumping of Gortlettragh. 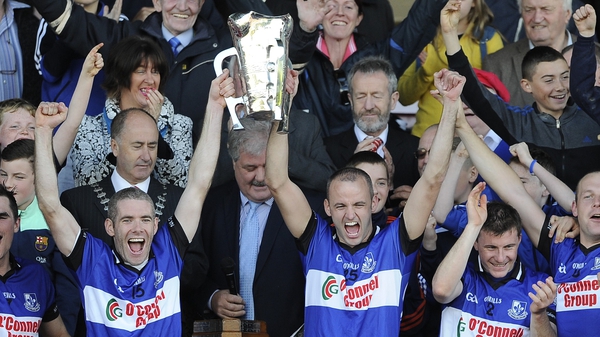