Danny Sutcliffe will start for Dublin in their Leinster SHC final clash with Kilkenny at Croke Park on Sunday, 4pm.

The St Jude's player has been sidelined after he broke his hand in two places while playing for his club in April. He lines out at number 12 against the Cats.

Mark Schutte, who dislocated his collarbone early on against Wexford in the semi-final, misses out.

TJ Reid hit 2-11 to inspire Kilkenny into the Leinster SHC final against Dublin next Sunday after a pulsating 3-19 to 1-17 replay victory over Galway at O'Connor Park Tullamore.

Just two points separated the sides at the break, but four points in a row after the restart from Brian Cody's side and Aidan Fogarty's 52nd minute goal clinched the win.

Galway relied heavily on Conor Cooney's accuracy to remain in touch with Kilkenny, but Reid's second goal in injury-time ensured there would be no repeat of last week's late antics.

After their epic drawn game, both sides continued where they had left off and tore into each other from the start.

TJ Reid and David Burke hit a point for each side, before a goal each in the fourth minute meant neither side could pull clear.

Reid hit the Kilkenny goal when he ran onto a breaking Padraig Walsh delivery, but Galway replied instantly when Andy Smith's goal was parried into the path of Jason Flynn, who batted the ball past Eoin Murphy.

Murphy was injured in the concession of the Galway goal and limped off soon after, but the Cats rallied and hit six unanswered points to work a 1-7 to 1-4 lead by the 19th minute.

Apart from their goal, Padraig Walsh's point in the 15th minute was Kilkenny's sole score from play in the half until Richie Hogan put them five points up in the 26th minute.

But Galway rallied well in the five minutes before half-time and three Conor Cooney frees and an Andy Smith point meant Galway only trailed by 1-11 to 1-9 at the interval.

Reid, Aidan Fogarty, Padraig Walsh and Tommy Walsh all found the target for Kilkenny after the resumption, but there was little doubt about the winners when Fogarty hit the net and Joe Canning's late 25-metre free flashed wide. 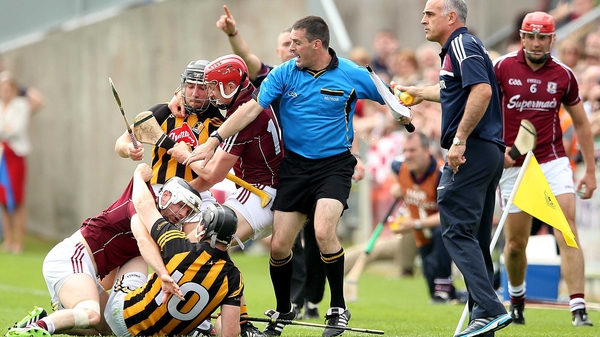 Anthony Cunningham relieved with Galway 'lifeline' after draw with Kilkenny