Longford have won the Lory Meagher Cup after a 3-18 to 3-16 win over Fermanagh at Croke Park.

The Ulster men led by 2-08 to 1-10 at the interval, but O’Brien netted again, and Eoin O’Donnellan added a third Longford goal

McGarry completed his hat-trick, but Donnellan’s 1-09 haul helped the Leinster men hold out for a historic triumph.

After Longford had gone ahead with two Cathal Mullane points, the Erne men struck for a goal in the tenth minute.

And it came gift-wrapped, Declan McGarry’s dropping effort from the sideline beneath the Cusack Stand deceiving goalkeeper Paddy Cullen and ending in the net.

John Newman launched a long range effort to keep the Leinster men in touch, with Kevin Connelly also hitting the target from distance.

But Fermanagh kept their noses in front, Francis McBrien and Sean Corrigan both on target, before McGarry grabbed his second goal.

There was nothing fortuitous about this one, a sweet finish to round off a clinical move in which Brendan McGarry played a key role.

But Longford, with the help of some solid defending from Paddy Corcoran and Conaire Flanagan, weathered the storm, and almost had a goal when Mullane was denied by Mark Curry’s excellent save.

They did find the net in the 24th minute, Joe O’Brien slipping in behind his marker to gather and level with a low shot to the net.

A Sean Corrigan free, his fifth point of the afternoon, sent Fermanagh in with a 2-08 to 0-10 lead at the break.

But Longford, now with the wind in their backs, made a storming start to the second half, hitting 1-02 in the opening couple of minutes.

O’Brien netted his second goal, finishing from close range off Mullane’s unselfish assist, and suddenly they were four ahead.

Donnellan consolidated with a handful of points from frees and play, and while Corrigan and substitute Shea Curran were able to respond at the other end, Fermanagh suffered a huge blow on 50 minutes when corner back Daniel Teague, one of their finest performers, received a straight red card.

Donnellan sent in a 68-metre free that went all the way to the net in the 57th minute, and the Midlanders led by six.

But they too had a man sent off, defender Conor Egan picking up a straight red, and Fermanagh narrowed the gap to a point when McGarry completed his hat-trick, blasting a 20-metre free to the net on 67 minutes.

Subs: S Curran (0-01) for Bannon, B Duffy for B McGarry, M Beggan for McBrien 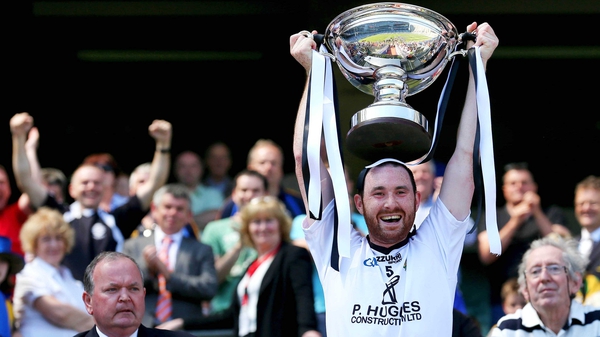