Laois survived a second-half scare as they maintained their unbeaten run in the Leinster SHC round robin with a 2-13 to 0-16 win over London at Ruislip.

Offaly native Eoin Kelly impressed for the Exiles, who doubled their tally inside seven minutes of the restart.

A John Brophy goal gave Laois a six-point lead but they only managed one further point, with London hitting seven wides in the final quarter.

Laois manager Seamus Plunkett made a number of changes before the throw-in.

A slight injury to Tommy Fitzgerald forcing a switch with Charlie Dwyer drafted into the starting line-up. Tom Delaney came in for Conor Dunne, with Dwane Palmer moving to midfield.

London stuck with the same team that they had named in midweek, but started sluggishly early on.

In their first competitive game on foreign soil, Laois began in good stead with Stephen Maher registering the first of his five first-half points after just 50 seconds.

Although London free-taker Eoin Kelly equalised with a point from play, striking over from a pass from Martin Duggan in the third minute, the Exiles struggled as Laois took control.

Maher fired a brace of points inside an 80-second spell, before a delay because of a leg injury to Kevin Walsh.

It forced the St. Gabriel's clubman to make an early exit in the ninth minute.

Kelly ended London's 10-minute barren spell to ensure a 0-04 to 0-02 scoreline and although Maher and Kelly traded points, Laois kicked on.

The O'Moore men gained a foothold at midfield, with Palmer and Patrick Whelan both impressive.

Maher landed his fifth point to make it 0-06 to 0-03 in the 16th minute, before a long range Matthew Whelan free opened up a four-point gap.

Laois continued to put the London defence under pressure, with direct ball paying off.

Brian Campion and Matthew Whelan combined to set up Foyle for a 21st minute point, and a minute later the Borris-in-Ossory/Kilcotton clubman grabbed the game's opening goal.

Laois gathered possession through Ross King from the resulting puck-out, before Foyle took on the London defence and drove a powerful shot past London goalkeeper James Barrett to open up a 1-08 to 0-03 lead.

John Purcell fired Laois' fourth wide soon after, but they extended their lead to 10 points by the 29th minute following points from Willie Hyland and Purcell.

London worked hard before the interval, with Kelly firing a brace of points from frees to close the gap to 1-10 to 0-05.

Laois made two changes at the break with John Brophy and Joe Campion introduced in place of Palmer and Dwyer respectively.

On the turnaround London showed far more intensity than they displayed in the opening 35 minutes. The hosts were much sharper on the restart, and really took the game to Laois.

London doubled their tally inside seven minutes of the second half. Kelly continued to pick off points from play and frees, while Duggan was also on target.

London knocked over the first four points of the second half to reduce the arrears to 1-10 to 0-09.

Indeed the gap would have been even less at this stage but for Laois goalkeeper Eoin Reilly making a fine save from Duggan in the 40th minute.

Maher and Kelly traded points, before Matthew Whelan landed his second score from 70 metres out.

London failed to yield and quickly made it a three-point game, but the introduction of Fitzgerald in the 47th minute greatly boosted the Laois attack.

Substitute Brophy netted the visitors' second goal in the 50th minute after great work by Whelan and Brian Campion, restoring the confidence of the large Laois travelling support.

This score handed Laois a 2-12 to 0-12 advantage, but amazingly the visitors could only manage one further point over the remaining 20 minutes.

Wind-assisted London were firmly on top with Kelly, Duggan and goalkeeper Barrett all converting scores.

But tellingly, the Exiles showed a lack of composure in the closing stages with a succession of wides and Laois prevailed by a three-point margin, their win sealed by substitute PJ Scully's closing point. 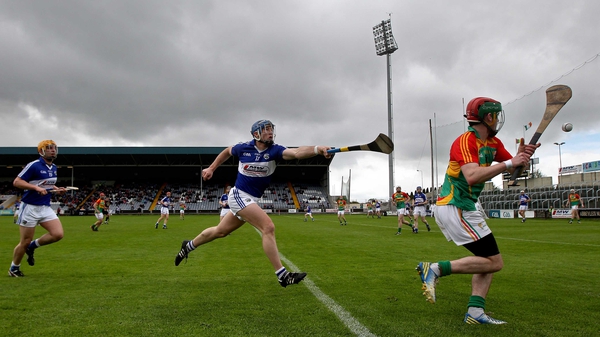