Offaly dealt Limerick’s promotion hopes from Allianz Hurling League Division 1B a sharp blow in O’Connor Park when they rescued a 2-15 to 2-15 draw thanks to Joe Bergin’s 12th point of the afternoon, scored with the last puck of the game.

Limerick led most of the way but will regret their final tally of 12 wides, having been four points in front with injury-time looming.

Two second-half goals from Graeme Mulcahy seemed to be enough to put the Treaty County in the driving seat, but a Peter Geraghty goal in the 69th minute left Offaly just a point adrift before Bergin’s late intervention.

Bergin was actually given two chances to equalise in injury-time, both from frees, both decisions that baffled Limerick manager TJ Ryan.

His first from the left-hand touchline struck the near side upright and was cleared, but he made no mistake with his second from midfield, splitting the posts.

Bergin’s freetaking kept Offaly in touch in the first half when they were outhurled in most sectors by the visiting Shannonsiders.

Kevin Downes and Paul Browne gave Limerick a two-point lead inside just 90 seconds of play while Offaly struggled badly to make any inroads into the slight breeze and stout Limerick defence.

Paudie O’Brien was the star performer in a strong Limerick half back line and the Kilmallock player also got forward to deliver a stunning score from the right-hand touchline, raising the white flag from 70 metres out.

Despite failing to score from play in the half, Joe Bergin’s accuracy from placed balls kept Offaly in touch and they trailed by just two, 0-08 to 0-06 at the break.

Shane Dooley struck two excellent points on the restart to draw the teams level, but Limerick bounced right back with the game’s first goal from the stick of Graeme Mulcahy.

The corner forward did brilliantly to control a high delivery from David Reidy out on the left wing and with just two touches, he blasted the ball into the top corner past James Dempsey.

Another Joe Bergin score, his only effort from play all day, left just two between the teams but Limerick then took control of the tie once more and struck four of the next six points.

Kevin Downes was particularly prominent during this phase of play, hitting two scores and setting up another from full forward.

With ten minutes to play Offaly hit a sudden wave of form and points from Bergin and Seán Cleary either side of a Dan Currams goal gave them their first lead.

Again Limerick responded well and it looked as if they had done enough when Mulcahy struck his second goal from close range and two more points were tacked on to make it 2-15 to 1-14, but Offaly kept working hard and a 25-yard shot from Peter Geraghty to the top corner put them in a position to snatch a share of the spoils right at the death. 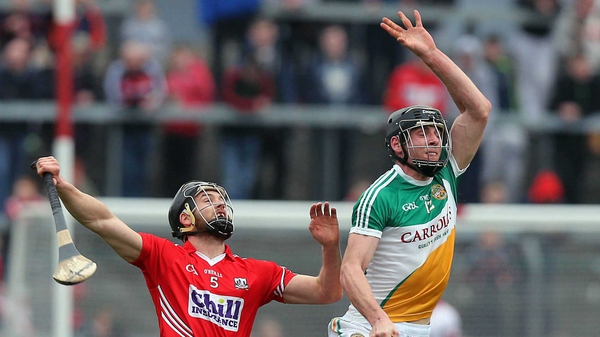