Tipperary lost out at Nowlan Park, having had John Carroll sent-off after only four minutes of the second half.

By that stage Waterford led 1-11 to 0-09 but 14-man Tipp played their best hurling after that, even though top scorer Eoin Kelly   (0-07) and Paul Kelly both had to retire.

Waterford can thank Eoin Kelly for their win – he contributed 1-09 of their total. Paul Kelly's 57th-minute goal had brought Tipp back to within a point.

Hoping to keep his side on track for their first league title since 2001, Tipp's Eoin Kelly opened the scoring in fine conditions.

His namesake, however, was not to be upstaged and the Deise's Kelly took a pass from Seamus Prendergast before drilling past Brendan Cummins to the back of the net.

Kelly (free) and Jack Kennedy added points to help Justin McCarthy's men move 1-02 to 0-01 ahead before Paul Kelly replied for the Premier county.

While not having the same flow as the earlier quarter-final, there was still some excellent hurling on show with the Eoin Kellys scoring 1-12 between them in the opening half.

Waterford led 1-11 to 0-07 at the break, with Kennedy and John Mullane, who forced Cummins to pull off a smart save, their other scorers.

Cashel youngster Ryan O'Dwyer, who made his league debut against Kilkenny last month, chipped in with Tipperary's other point.

Eoin Kelly sent two points over the Waterford crossbar to eat into Deise's lead, early in the second half, and Carroll also tagged on a free.

But the latter was soon on the sidelines as he was dismissed by referee Michael Haverty for a straight red card offence.

Tipp's hopes were hit again when top scorer Kelly was forced off with an injury. His elder brother Paul, whose goal sparked a thrilling finish, also had to retire with an injury.

The Tipperary men had trailed by a goal after 52 minutes, but just a minute later Paul Kelly beat Clinton Hennessy with a measured ground shot.

Waterford, though, never lost the lead and two points by John Mullane had them a point in front ten minutes from the end.

A superb point from a sideline by Eamonn Corcoran followed by a pointed free made it 1-18 each with only a minute remaining.

There were four minutes of added time during which Eoin Kelly edged Waterford in front with a free but Willie Ryan levelled at the other end, before Walsh emerged as the Waterford hero in a game that only came to life when Tipperary were reduced to 14 men. 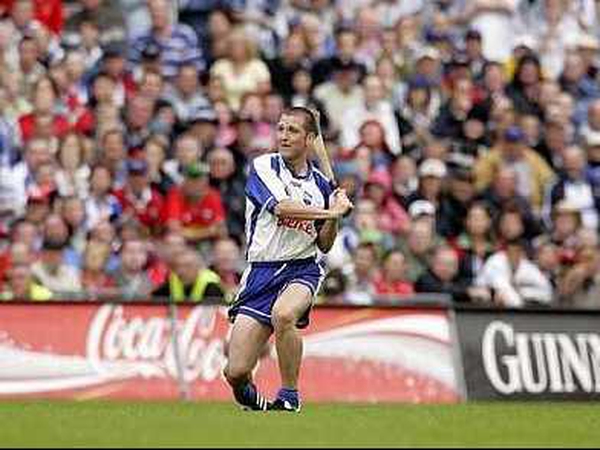