The mercurial Ben O’Connor inspired Cork to Liam McCarthy Cup victory, his magical 1-7 tally landing a 30th All-Ireland senior hurling championship title for the Leesiders as they beat Galway 1-21 to 1-16 in front of 81,136 fans at Croke Park today.

Galway’s bid for a first win in 17 years failed, but they went down with a mighty fight, playing their part to the full in a thrilling and richly entertaining final.

The win means back-to-back titles for the Rebels in the 117th hurling final, but they had to dig deep to see off a plucky Tribal side.

Jerry O’Connor and Tom Kenny established an early control for Cork at midfield, and the experienced Brian Corcoran stretched Galway full-back Tony Óg Regan to the limit every time he gained possession.

Corcoran squeezed over a superb point from a tight angle, and his delightful touch set Niall McCarthy up for a score that eased the Rebels into a 0-4 to 0-1 lead.

Galway struggled to break down a solid Cork defence, with the half back line of John Gardiner, Ronan Curran and Seán Óg Ó hAilipín giving nothing away.

But they did start to concede soft frees, which the supremely accurate Ger Farragher converted unerringly.

Midway through the half, however, a long clearance from full-back Diarmuid O’Sullivan found its way right through to Ben O’Connor, who buried the ball in the back of the net for a six points lead.

But the Tribesmen responded positively, and Alan Kerins was denied by a superb Donal Óg Cusack save.

Derek Hardiman was heroic in the backline and midfielders Fergal Healy and David Tierney began to get some in the central area, and both floated over points as the gap contracted.

And when Farragher brought his tally to six, just two points separated the sides at the break, the champions ahead by 1-9 to 0-10.

There was nothing to separate the sides in the early stages of the second-half, with two Alan Kerins points cancelled out by Jerry O’Connor and Timmy McCarthy.

But Ben O’Connor, Cork’s most influential forward, gave Cork three-points of breathing space with a breakaway point after their opponents had failed to make a period of supremacy count.

The Connacht men were right back in it, however, when Damien Hayes grabbed a 49th minute goal, finishing from close-range after Cusack had kept out Richie Murray’s driven effort.

As the pace intensified, Cork hit back with scores from Gardiner, from a long distance free, Kenny and Ben O’Connor.

Joe Deane was getting little change out of excellent corner back Damien Joyce, but O’Connor was on fire, bringing his tally to 1-6 with a sublime long range effort for a three points advantage with just over 10 minutes to play.

And with skipper Ó hAilipín providing inspiration and leadership from the back, the All-Ireland champions dug deep.

Deane converted his third free, and yet another gem from O’Connor eased Cork into a five points lead.

It was an increasingly desperate situation for Galway, and when they did get back on the offensive, Diarmuid O’Sullivan averted the danger with a timely hook on substitute Kevin Hayes and goalkeeper Cusack pulled off another fine save.

The final whistle sent a red and white tide flooding from the stands onto the pitch as Seán Óg Ó hAilipín ascended the steps to lift the Liam McCarthy Cup. 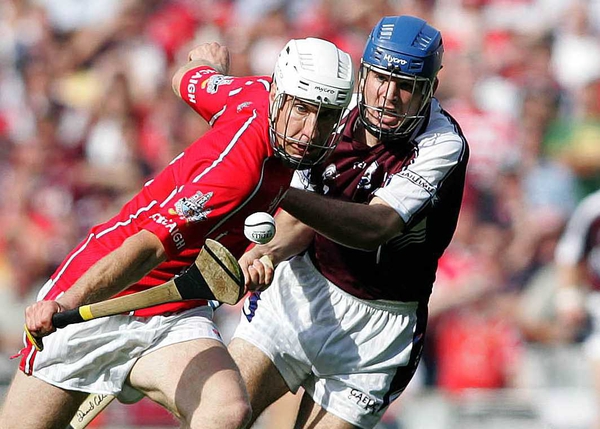