3.30: The referee throws the ball in and a frantic start sees Ger Farragher hit the first wide after two mins.

2 mins: Cork earn a free in from just inside the half way mark and Ben O'Connor opens the scoring with a well hit strike.

6 mins: Brian Corcoran wins good possesion in the corner before hitting a good point from a tight angle.

12 mins: Galway win a free and Farragher puts it over from a slight angle.

15 mins: Galway take a quick short puck out which ends up with Farragher who takes another point for the tribesmen.

17 mins: O'Sullivan launches a long ball down field and O'Connor collects before beating his marker to score the first goal of the game with a shot into the bottom corner of the Galway goal.

18 mins: O'Sullivan receives a yellow card for a jersey pull and Farragher converts the resulting free.

22 mins: Joe Deane takes his first free and easily converts from straight in front of the posts.

26 mins: Cork win the puck out and Corcoran wins it to feed O'Connor, who hits another excellent Cork point.

27 mins: Farragher fight for posession and earns a free in from the sideline. He dusts himself down to drive the ball straight between the posts and keep Galway in touch.

29 mins: O'Connor does the same at the other end to restore Cork's 3-point margin.

31 mins: O hAilpín brilliantly takes a high ball and launches a massive effort down field but watches it go wide.

32 mins: Hayes wins another quick Donoghue puck out and feeds Healy for another good Galway point.

34 mins: Cork have had the better start but seven wides sees a game Galway just one goal behind with their confidence growing.

36 mins: A highly competitive half ends with Galway behind but in the ascendancy as Farragher wins and converts a free to leave just two points separating the sides.

36 mins: The second half begins with Galway facing the Hill 16 end but O'Sullivan does well to repel their first attack.

38: Hayes takes a great catch and feeds Kerins who makes no mistake from a slight angle.

40 mins: McCarthy battles well and hits another Cork point but Kerins immediately replies for Galway after a quick puck out catches Cork cold.

45 mins: A massive Cusack clearance reaches O'Connor who pulls away from his marker to score.

46 mins: Corcoran then adds another massive quick point as Cork open up a four-point gap.

48 mins: Galway win a debatable free and Farragher hits it wide from a tight angle.

49 mins: Hayes breaks downfield and feeds Richie Murray whos goal bound shot is well saved by Cusack, but Hayes follows up to put the rebound into the Cork goal.

50 mins: Cork win a free from the halfway mark, on the sideline and Gardiner steps up to send a huge effort over the bar.

52 mins: Galway send quick ball low down field and Farragher collects to reduce the deficit to one point with a brilliant point moving away from goal.

53 mins: Cork break downfield and show their pedigree to reply with another point.

55 mins: Ben O'Connor is on fire and hits another point as Cork gain the initiative once more.

56 mins: Derek Hardiman continues his excellent defensive display to break up another Cork attack and send a massive effort over the bar from inside his own half.

58 mins: Ben O'Connor increases his tally to 1-06 with another point.

60 mins: Gardiner earns a yellow card for a high tackle on Kerins - Galway convert the free as Kerins leaves the field for treatment.

62 mins: Ronan wins a Cork free 30 yards from goal and Og Regan gets a yellow, while Deane converts the free.

65 mins: Kevin Hayes comes on for David Forde for Galway.

67 mins: Ben O'Connor wins loose ball to push Cork further ahead with another good point as Galway begin to fade.

69 mins: Galway's efforts for a goal are continually thwarted by a resolute defence as time ebbs away - two minutes extra time will be played.

70 mins: Corcoran wins ball to take the pressure off his defence but his effort goes wide.

71 mins: Galway break down field and are twice denied a goal by excellent saves from Cusack. 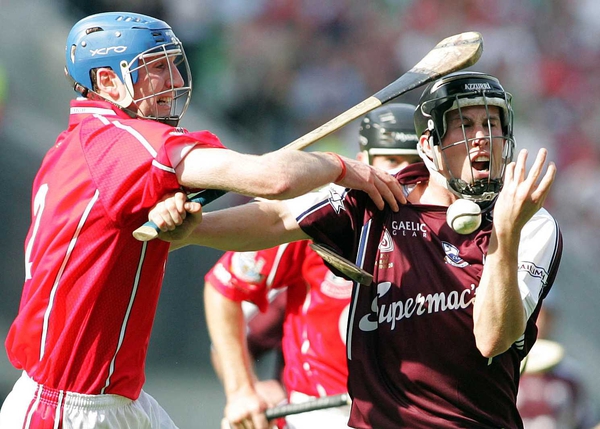