Ireland's faint hopes of reaching the knockout stages of the Hockey World Cup were ended after a 3-0 defeat to Germany at the Wagener Hockey Stadium in Amstelveen.

Following defeats to the Netherlands and Chile, Sean Dancer’s side knew only a win over the world number four side – nine places ahead of Ireland in the rankings – would give the team in green any chance of progression, but it wasn’t to be.

Nike Lorenz’s strike meant it was 1-0 to Germany at the interval, with Charlotte Stapenhorst and Sonja Zimmermann from a penalty corner rounding off the scoring.

The Germans finish second in Pool A behind the Netherlands, with Ireland bottom of the standings after that ignominious defeat to Chile on Tuesday. They will now play their next fixture on Sunday in a classification match, for the 9–16th place quarter-finals, with the opponent to be confirmed on Friday.

The match began in a lively manner, Katie Mullan’s strong running caused Germany plenty of discomfort and a lovely slip pass through from Deirdre Duke gave her a strong shooting opportunity.

She cracked goalwards but Nathalie Kubalski calmly batted it away.

Germany, meanwhile, were working the ball through their star turn Lorenz who pulled the strings for Elisa Gräve to first a dangerous shot which Ayeisha McFerran blocked.

Lorenz again was the creator for Stapenhorst’s sharp chance, McFerran again getting a crucial pad on it.

And the world number four side took the lead in the 23rd minute from a clever switch to the left where Lorenz was on hand to flick across goal and find the net.

The Green Army stepped up quickly, Katie McKee and Michelle Carey both firing efforts on goal before the main break and they carried the momentum into the second half, winning their first penalty corner after the resumption.

Mullan’s through pass was inches from getting the perfect connection from Naomi Carroll but they were rocked once more in the 35th minute.

Kira Horn’s driving run put Ireland on the back foot and while Sarah McAuley got a vital intervention, Stapenhorst pounced on the loose ball to sweep into the net.

Needing a huge comeback, they continued to make inroads with Mullan’s pass just evading a final touch from Naomi Carroll.

Dancer threw caution to the wind in the closing quarter, swapping out goalkeeper Ayeisha McFerran for an extra outfielder.

It led to Zara Malseed drawing the best save of the day from Kubalski, diving full length to repel the shot on the turn.

They bravely kept out two penalty corners with no recognised goalkeeper, but Germany did get eventually another when Zimmerman netted a penalty stroke after Sarah McAuley blocked a shot on the empty goal with her body.

Lorenz had another stroke chance with 20 seconds to go but McFerran produced a magnificent save down low to limit the damage to three. 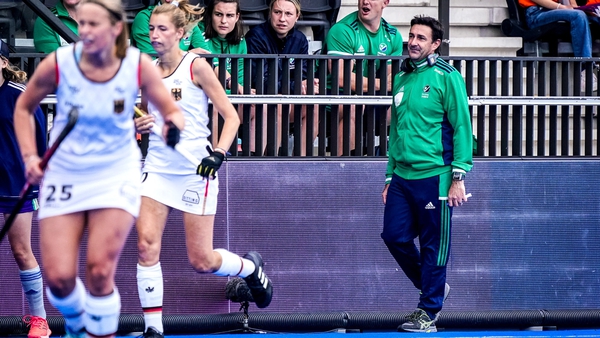