Ireland head coach Graham Shaw heaped praise on his team's remarkable bond after they marched into a Hockey World Cup final against the Netherlands, and said they'll savour every single second of their dream journey.

Gillian Pinder kept her cool in another nerve-shredding penalty shootout to break Spanish hearts, after the Green Army had edged out India in the quarters in similar fashion.

Goalkeeper Ayeisha McFerran was immense on both occasions but this has truly been a collective effort. Ireland came here as the second-lowest ranked country in the tournament and yet here they are, 60 minutes from winning the whole thing.

For Shaw, it was almost too much to comprehend.

"I don't even know what to say - I'm afraid I'm going to curse here!" he told RTÉ Sport.

"I'm overwhelmed. What an effort. Spain are a really good side and made it very hard for us. This is just incredible for our sport. I never thought this would happen in our lifetime. I'm just so proud of them."

Anna O'Flanagan's third-minute goal off a penalty corner gave Ireland the perfect start but the Spaniards hit back, Alicia Magaz slamming home in the third quarter.

Ultimately it was decided by penalties, and in sudden death Pinder slotted to the goal after McFerran produced yet more heroics.

"I have never been involved with a team that's so together in my whole entire life," Shaw added.

"They're best friends. They fight for every single moment that they have with each other out there.

"They never give up, stay together, and even when the hard times came with the penalty shootout they still believed.

"Not in my lifetime did I think an Irish hockey team would make a World Cup final. We'll enjoy it. We've enjoyed every moment of this together. Hopefully it's going to be a life-changing moment for these girls."

Follow all the Ireland v the Netherlands on Sunday [4.30pm] via our live blogs on RTÉ.ie and the News Now App, on TV with RTÉ 2 and the RTÉ Player, and radio on 2fm. 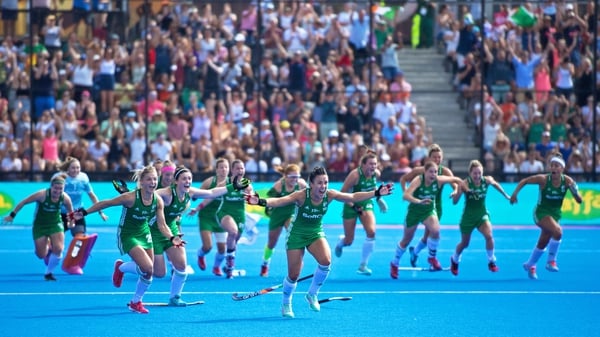 Sensational Ireland through to the Hockey World Cup final