Ireland have booked their place in the Hockey World Cup final following a thrilling penalty shootout against Spain.

Gillian Pinder scored the decisive penalty to send Graham Shaw's side through to the decider after both sides were inseparable after 60 minutes of normal time.

It was a second consecutive shoot-out victory for Ireland, who beat India in the quarters, as they set up a showdown with either the Netherlands or Australia.

It was Ireland who opened the scoring when Anna O'Flanagan deflected a penalty corner in the third minute.

Shaw's charges - who are ranked 16th in the world -  maintained their lead until the third quarter when Alicia Magaz levelled it up.

Both sides went in search of a winner with Ireland earning a penalty corner at the death. They came close to settling the tie in normal time but Spain managed to avert the danger, meaning that a shootout was required once again.

Pinder was first to step up and she slotted home her effort and the score stood following a referral. Spain nabbed the equaliser through Georgina Olivia.

Chloe Watkins edged Ireland back in front but Spain were back on level terms with their final penalty after Lola Riera lobbed Ireland's keeper Ayeisha McFerran, who was excellent throughout once again.

The shootout then went to sudden death where Pinder converted the crucial shot to send Ireland through to the final.

It has also been confirmed that the team will get a civic reception on Monday evening.

The event is being planned whether they win or lose against the Netherlands tomorrow.

The team will be invited to Dublin City Hall for an official reception and there will be a stage erected for a public event on Dame Street.

"Getting to a world cup final is a magnificent achievement for Irish women and for Irish sport," he said. 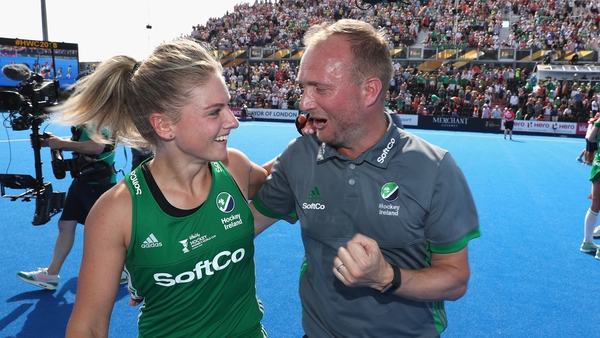 'They fight for every single moment they have together'