Aideen Walsh is in the field for this week's KPMG Women’s Irish Open at Dromoland Castle, and like the other five Irish amateurs competing, she will be dreaming of creating her very own Shane Lowry moment.

Lowry, the current world number 20, was catapulted into the golfing world off the back of a remarkable victory at the 2009 Irish Open, winning the prestigious event as an amateur golfer.

A two-year exemption onto the European Tour was perhaps the main prize for the Offaly man, who lost out on the hefty winner’s cheque as a result of his non-professional status.

And while Co Clare native Walsh has no immediate plans to turn to the professional game, she admits that the footage of Lowry holing the winning putt at Baltray will be on her mind heading into the start of the Irish Open, which returns to the Ladies European Tour for the first time in ten years.

"It is very exciting to play in an Irish Open, a home event," said Walsh, speaking to RTÉ Sport ahead of this week’s tournament.

"The six of us will definitely be thinking of Shane Lowry’s moment when he won; you always dream of those things when you get the opportunity to play in the professional event."

Based in Ennis, when not practising, Walsh teaches English to Ukrainian children at Scoil Chríost Rí, having relocated from Lucan in Dublin, where she was able to avail of the excellent facilities of Golf Ireland at Carton House.

A member of both Lahinch and Dromoland Castle, Walsh is hoping that home advantage hands her a headstart on the field for this week’s Irish Open, after only finding out over the past two weeks that she had gained an invitation to play.

"I’m a member of Dromoland and I thought there may be an invite from Dromoland or Golf Ireland," she explained.

"[Director of golf at Dromoland] Eamonn O’Donnell pulled me aside and let me know a couple of weeks ago. but I think he left it as late as possible just to tease me.

"I suppose I do have a bit of an advantage. I have lots of information about the course before I even go there.

"We won the All-Ireland senior cup with Lahinch and I’ve been playing pretty well. I’ve been practising for the last few weeks in Dromoland, so I feel pretty confident. I just need to tidy up a few processes and routines and I should be good to go.

"They’ve been preparing the course since January, doing loads of work, and we only had nine holes open for a few months. Over €2m have been invested. It looks great, they’ve knocked loads of trees, put in new tee boxes and the 18th is like a completely new hole.

"And once I saw the signs going up around the resort, there was a realisation that it was just around the corner."

Leona Maguire is the star attraction this week in Clare and Walsh hopes to see the Cavan women in contention coming down the final hole on Sunday.

"It’s great she’s coming, I’m really excited to see how she gets on and I hope she’s in contention coming down 18," said Walsh

"That would be even better," she added, when suggested that she could be walking alongside the former world amateur number one.

Walsh will play alongside four-time Solheim Cup star, Caroline Hedwall from Sweden and Belgium’s in-form Manon De Roey in Thursday’s first round with an 8.30am start, and while Walsh has to take a week off school – "my school would be fairly sound," she adds – she is going into the week with no expectations other than to stay focused.

"I don’t have too many expectations, I want to try to enjoy it as much as possible," said Walsh.

"I’ll write down a few goals for myself, like in an amateur event, break it down and see how I get on, and just focus on processes and strategies and try to stay present and enjoy it as much as I possibly can."

As for the future, Walsh said she is enjoying her life as schoolteacher and amateur Ireland international and is not looking to join the professional circuit at the moment.

"I wouldn’t see myself doing it at the moment," said Walsh.

"I’m pretty happy teaching and playing internationally, I’m enjoying mixing the two of them at the moment. But you never really know.

"I really enjoy playing for Ireland and you don’t really get to do that as a pro."

Watch the Women's Irish Open live on RTÉ News this Thursday and Friday, with live coverage on RTÉ One on Saturday and Sunday. 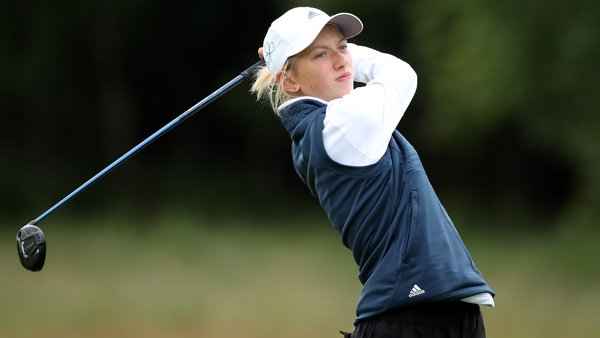