The four Irish golfers involved in the DP World Tour's Joburg Open have withdrawn ahead of the second round due to concerns over a new Covid-19 variant in South Africa.

Niall Kearney, Cormac Sharvin, Jonathan Caldwell and Paul Dunne are among a number of golfers to have pulled out ahead of the start of Friday's second round.

A joint statement from the Sunshine Tour and DP World Tour confirmed that the event would be completed although the South African Open Championship will change status while the Alfred Dunhill Championship has been cancelled.

South African sport faced a shutdown on Friday due to the detection of the new variant and Munster’s United Rugby Championship clash against the Bulls in Pretoria on Saturday was cancelled too.

South Africa is one of six countries being placed on an updated UK Red List, which comes into effect at 4am on Sunday morning.

The second round resumed at 6am on Friday after a thunderstorm brought an early end to play on Thursday at the Randpark Country Club.

The tournament has seen 23 withdrawals but organisers said that it would finish.

"The Joburg Open, currently being played at Randpark Golf Club, will go ahead as planned and will finish on Sunday as scheduled as a full co-sanctioned tournament between the two tours," a statement read.

"The South African Open Championship, set to be played at the Gary Player Country Club at Sun City from 2-5 December, will also still be played as scheduled. However, it will go ahead as a solely Sunshine Tour event with a prize fund of US$500,000.

"The Alfred Dunhill Championship, which was scheduled to be played at Leopard Creek Country Club from 9-12 December, has after lengthy consultations with Alfred Dunhill, unfortunately been cancelled due to the adverse effect the travel restrictions will have on the field."

Dunne had finished out his weather-delayed first round on Friday morning before becoming aware of the situation.

Speaking to RTÉ Radio 1's Morning Ireland, Dunne, due to fly out of South Africa to Dubai on Friday morning, spoke of the confusion.

"I’m just not sure that everyone is aware," he said.

"I went to bed early last night and was up early this morning and I didn’t really look at my phone. I’d three holes to finish in my first round and when I came in, I turned my phone on and I had messages from everyone asking me if I was going to go to the airport or stay and play. That’s when I started to look into it.

"I think a few people are on the course without kind of a real idea of what’s going on, but some people are finding it hard, I’ve heard people can’t get a flight until Sunday evening. The only flights available are through Ethiopia and I think with the stuff in Ethiopia [ongoing conflict] nobody fancies travelling through there either. Bit of a minefield at the minute."

Dunne said that officials had indicated that the tournament would continue as planned while the withdrawing players would not face any sanctions.

"They just said that they are still confident that the tournament bubbles are a safe place to be.

"The problem they’re going to have is that most of the staff are UK based and you’re supposed to be here three weeks, and I’m assuming the staff aren’t going to want to stay for three weeks because that means they’ll have to quarantine and miss Christmas. So I’m sure there is a lot of internal stuff going on between them.

"We haven’t got an update from them but they’ve just said that if we want to withdraw we could withdraw without fines or without penalties or anything like that."

The event is the first on the schedule of the DP World Tour, formerly the European Tour.

Kearney had been best placed of the quartet on one under par while Caldwell was on level par with two holes to play from his first round. Dunne was three over through 15 while Sharvin was seven over par. 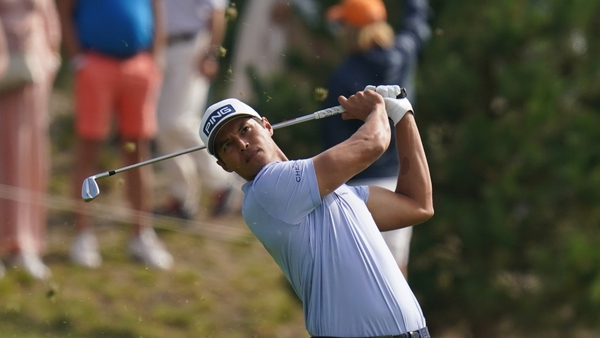