Defending Open champion Shane Lowry admits he was forced to up his game in an attempt to keep pace with playing partner and championship leader Louis Oosthuizen.

Winner at Royal Portrush two years ago, Lowry started the day seven shots behind the South African at one over and while that margin did not change after another 18 holes he ended it feeling better than he had done 24 hours earlier.

Lowry turned in 32 after four birdies and one bogey and he picked up two more shots late in the round to sign for a 65 and move himself to four under.

"I played lovely golf today and put myself in the fairway, and when I did, I gave myself chances and managed to hole a few putts, so very happy on my day," he said.

"It does help whenever one in the group is playing well. When you're playing with someone who is leading it does spur you on to try and catch them.

"I was out there trying to get as many shots as I could back on Louis towards the end because I knew he was going be the leader going into the weekend.

"Obviously I’m seven back now. I was seven back when I finished yesterday, so not much different.

"I was 10 back in morning (after early starter Collin Morikawa got to nine under) so I knew I needed to shoot a good score.

"I felt I was a bit hard on myself yesterday. I didn’t play as bad as I felt I did so I just trusted myself to go out there and shoot a good score and thankfully I did." 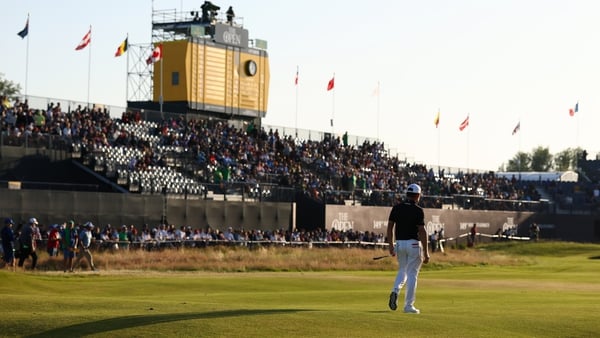