Louis Oosthuizen will take a two-shot lead into the third round of the 149th Open after recording the lowest halfway total in championship history at Royal St George's.

Oosthuizen fired an eagle and four birdies as he added a 65 to his opening 64 for a total of 129, eclipsing the previous best of 130 set by Nick Faldo in 1992 and matched by Brandt Snedeker in 2012.

Only a bogey on the 16th prevented Oosthuizen from matching the lowest halfway score in any major – Brooks Koepka’s 128 in the 2019 US PGA – but he will be more concerned with the Claret Jug than records after the events of this season.

Already a runner-up in all four major championships, Oosthuizen took his unwanted total of near misses to six by finishing second in both the US PGA at Kiawah Island and the US Open at Torrey Pines.

But the 38-year-old South African, who won the Open at St Andrews in 2010 and lost a play-off at the same venue in 2015, is in pole position to claim an overdue second major after following birdies on the first, seventh, 12th and 13th with an eagle on the 14th.

At 11 under par, Oosthuizen was two shots clear of 2020 US PGA champion Collin Morikawa, with three-time major winner Jordan Spieth a stroke further back.

Our defending Champion is finding his groove on the greens 💪@ShaneLowryGolf moves into the red at Royal St George's.

Watch the rest of his round here 👉https://t.co/nF1CsC3YNF

Defending champion Shane Lowry put himself back in contention with a super 65.

The Offaly man had just a single bogey on the fifth and hit six birdies, including three in four holes before the turn and others on 15 and 17.

Added to his opening 71, that took Lowry to four-under-par and a share of 16th.

Morikawa had earlier been blissfully unaware of his own chance to make history, seven birdies in the first 14 holes meaning he needed to play the remaining four in two under to card the lowest round in any men's major.

However, Morikawa bogeyed the 15th and missed good birdie chances on the 16th and 18th to return a 64, a shot outside the course record and two adrift of the major mark set by Branden Grace at Royal Birkdale in 2017.

Morikawa’s halfway total of 131 was also a shot outside the Open record which Oosthuizen would later break, but he said: "I had no clue what any record was. I’m awful with that stuff. I know now."

Dustin Johnson, Dylan Fritelli and Scottie Scheffler are four shots behind Oosthuizen on seven under while Emiliano Grillo, who almost chipped in for eagle on 18 and matched Morikawa's mark of 64, Daniel Van Tonder, Marcel Siem, Andy Sullivan and Justin Harding are a shot further back.

Major winners Brooks Koepka and Jon Rahm are on five under.

Siem, who celebrated his 41st birthday on Thursday, secured a place in the Open by winning a Challenge Tour event at the weekend, but considered not playing in order to focus on gaining his card via the second-tier circuit.

.@GrilloEmiliano was this close to equalling the Royal St George's course record!🤯

It's still a brilliant 64 for the Argentinian, including SIX birdies on the back nine🇦🇷

Keep up to date with the live action 👉 https://t.co/xYY44zAFs3#TheOpen pic.twitter.com/seYuxo5vos

A second successive level-par 70 ensured that 2014 champion Rory McIlroy did not endure back-to-back missed cuts – having missed out on playing the weekend at his home Open at Royal Portrush in 2019.

But it left him well off the nine-under pace set by fellow morning starter Morikawa and made his chances of winning a first major in seven years remote at best.

Part of that was his own doing as he went straight at a risky flag at the front of the par-three 16th but found a bunker and then missed a short putt for another bogey at the next.

Ryder Cup captain Padraig Harrington ensured he'll be sticking around for the weekend with a strong second-round 68 on Friday.

Harrington started the day on two over but he got home in two under today to move to level par overall, inside the projected cut mark of +1.

There was some frustration for the Dubliner after he coughed up a bogey on the 18th having birdied four of his previous eight holes but this was a very good morning's work for Harrington.

It was a disappointing day for 2011 champion Darren Clarke, who started the day just inside the cut mark but hit four bogeys and a triple on 10 on his way to a 75 that ended his chances of making the weekend.

Clarke finished the final seven holes in one under but the damage had been done.

A big man with the big moment 🙌

6' 9" @jigger_thomson sends the crowd wild at 16 with the first ace of the week 👏 #TheOpen pic.twitter.com/FAnBYb3boV

Jonathan Thomson was in danger of missing the cut on his Open debut until a hole in one turned around his week.

The 6ft 9ins Englishman was struggling right on the mark at one-over as he headed to the 149-yard 16th, but having pitched his tee shot on the fringe, he watched it take a few bounces before rolling straight into the hole.

He followed that with a birdie at the next to comfortably make the weekend on two under. 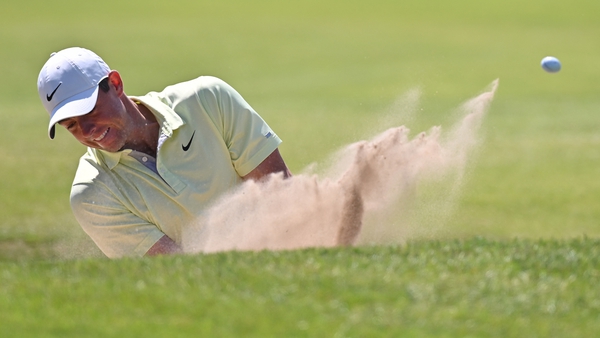