Victory at the Tour Championship in Atlanta will not completely erase the disappointment of a futile season at the majors for Rory McIlroy, but it may be worth far more than the $15m he received for winning the FedEx Cup.

The confidence gained from playing his best on a big stage and beating nemesis Brooks Koepka can only help his self-belief after a disappointing final round when paired with Tiger Woods at the same event last year.

McIlroy emphatically outduelled Americans Koepka and Xander Schauffele with a closing four-under 66 at East Lake en route to the biggest prize in the sport.

He finished at 18-under, four shots ahead of Schauffele to claim the season-long FedEx Cup for the second time on the PGA Tour, after his 2016 win.

It was a sweet stroll up the final hole for McIlroy, who last year had to endure the walk alongside a victorious Woods as the heaving gallery chanted, "Tiger, Tiger."

This time, chants of "Rory, Rory" rang out from the crowd.

"I must say I didn't enjoy that walk last year like everyone else did," McIlroy said. "I never took the fight to Tiger.

"It's amazing how different things can be in a year."

McIlroy took the fight to Koepka just four weeks after being given a lesson by the American when they were paired in the final round at a World Golf Championships event in Memphis.

"Going up against the number one player in the world today, he got one over me in Memphis and I wanted to get some revenge," McIlroy said.

"To play like that alongside Brooks, get the win, win the FedEx Cup, it's awesome." 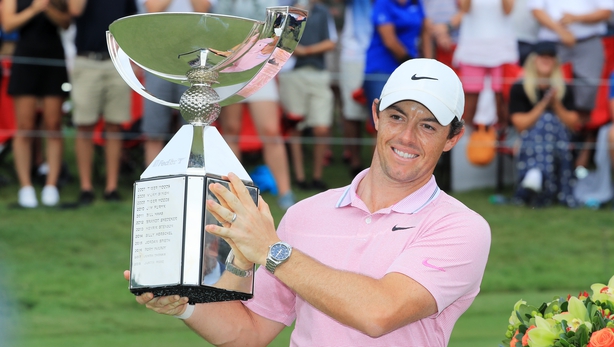 Schauffele shot a closing 70, while Koepka was unusually error-prone in a 72 to tie for third with Justin Thomas, five shots behind.

McIlroy, who teed off one stroke behind Koepka, hit the ball long and straight as he split fairway after fairway.

Koepka, on the other hand, was often wayward. At the par-four seventh he lost a ball after hooking a tee shot into the trees and took a double-bogey.

McIlroy picked up three shots there with a birdie and from that point Schauffele was his main challenger.

The Holywood native opened the door slightly with bogeys at the 14th and 15th holes, but slammed it shut again with a clutch eight-foot par putt at the 16th.

McIlroy's third win of the year followed triumphs at the Players Championship and Canadian Open.

His major results were disappointing, however, particularly a missed cut at the Open in his homeland at Royal Portrush.

"To win three times is awesome," he said.

"I feel like I could have won more but to win the FedEx cup again, to persist the whole way throughout the year, to keep giving myself chances, even when I was getting knocked back and not be denied, I'm very proud of myself."

The Tour Championship used a staggered scoring system for the first time, based on accumulated points.

Hence, top seed Thomas started at 10-under, the second seed at eight-under and so on down to even par for the 26th-to-30th ranked players in the field.

Fifth seed McIlroy, who started on five-under, shot the best score of the field anyway, 13-under-par 267.

"My goal was to shoot the lowest score of the week," he said. 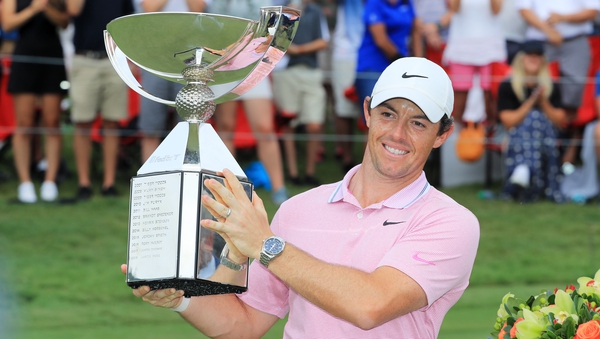