Rory McIlroy won the Tour Championship and FedEx Cup title for the second time in four years to pocket the $15million first prize in Atlanta.

McIlroy carded a closing 66 at East Lake to finish 18 under par, four shots ahead of American Xander Schauffele.

World number one Brooks Koepka, who held a one-shot lead after the completion of the delayed third round, ran up a double bogey on the seventh and carded a hat-trick of bogeys on the back nine to drop back into a tie for third with Justin Thomas.

McIlroy began the week by questioning both the radical new format and the focus on the extraordinary prize money on offer, but ended it with a third win of the season following victories in the Players Championship and Canadian Open.

The last putt of the season. 🏆@McIlroyRory finishes in style @PlayoffFinale.

Starting this year, the player who had the most FedEx Cup points after the BMW Championship started the first round of the Tour Championship on 10 under par, in this case Thomas.

The second-highest points earner began at eight under, the third-ranked player at seven under and so on, on a sliding scale down to the players in 26th to 30th who started on level par.

McIlroy started on five under par and had reached 14 under by the end of the third round, which had been suspended on Saturday afternoon due to bad weather around 30 minutes before lightning strikes resulted in five spectators being taken to hospital.

The Northern Irishman and Koepka both started the final round with five straight pars before making a birdie on the par-five sixth, but the turning point came at the next as Koepka made a double bogey following a lost ball off the tee and McIlroy holed from 20 feet for birdie.

Koepka responded superbly to birdie the next as McIlroy enjoyed a major stroke of luck when his pulled approach hit a tuft of grass on the edge of a drain and stopped short of the water.

Birdies on the 12th and 13th took McIlroy four shots clear and although he bogeyed the next two holes and had to hole from eight feet on 16 to avoid an unwanted hat-trick, McIlroy effectively sealed victory with a birdie on the 17th and rounded off the week in style with another on the par-five 18th. 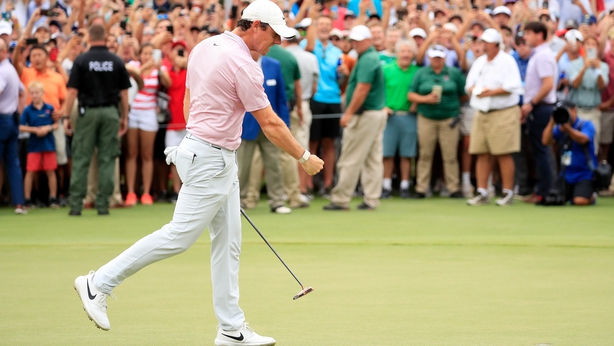 McIlroy played alongside Tiger Woods in the final round last year as the 15-time major winner was victorious and admitted: "I didn't enjoy that walk last year like everyone else did, I played terribly.

"I got myself in the final group and never took the fight to Tiger.

"Going up against the number one player in the world today, he got one over on me in Memphis and I wanted to sort of try to get some revenge today so to play like that alongside Brooks and get the win, win the FedEx Cup it's awesome.

"It's amazing how different things can be in a year."

McIlroy added: "My goal today was to go and shoot the lowest score of the week. I made those two bogeys  on 14 and 15 and a huge par save on 16 and then was able to birdie the last two.

"Such a cool way to end what has been for me a great season. I'll look back on this season and there's been a lot of good things I've done and I'll try to improve again for next year.

"I've given myself so many chances.

"To win three times is awesome. I feel like I could have won more but to win the FedEx Cup again, to keep giving myself chances even when I was getting knocked back, I'm very proud of myself and I'm going to enjoy this one tonight."