Emily Scanlon told RTÉ’s Ciarán Mullooly that it was such an emotional day watching the 32-year-old during his final round at Royal Portrush on his way to a maiden major victory that it led to her having her first brandy in 10 years.

"I drank two yesterday, it’s nearly killing me," she said.

"But it’s great," she added. "It’s great being able to see all of this happen."

Ms Scanlon told of one particular story from Lowry's childhood that is testament to both his curiosity and a strong stomach.

Shane Lowry's proud grandmother Emily Scanlon reveals one of the secrets to his success.......eating turf from the bog for the immune system. pic.twitter.com/TOe70BdTfF

"He had a great upbringing. I remember I minded him while his mother was working when they were building a house in Ferbane. He was always on the go.

"I had a turf box in the corner beside the range, and when I went to the clothesline, I’d put  them into it and he’d have all the turf mould ate.

"Whether it worked for his immune system or not, I don’t know, but he got there anyway."

The "proud" granny said the win has given the town of Tullamore a much needed shot in the arm.

"It gave our little town a great boost, which was needed, because there's so much doom and gloom going on.

"I am a very proud granny. It’s great to live to see all of this happen."

The family pride was evident in the golfer’s early success. Lowry’s victory in the Mullingar Scratch Cup led, according to Ms Scanlon, to his grandfather comparing him to Tiger Woods.

"He came home [after winning the cup] and I was shouting at him, saying get out there and bring me in a bucket of turf.

"He said: You won't see Tiger Woods bringing in turf. You know, he thought he was Tiger Woods when he won the Mullingar Scratch Cup." 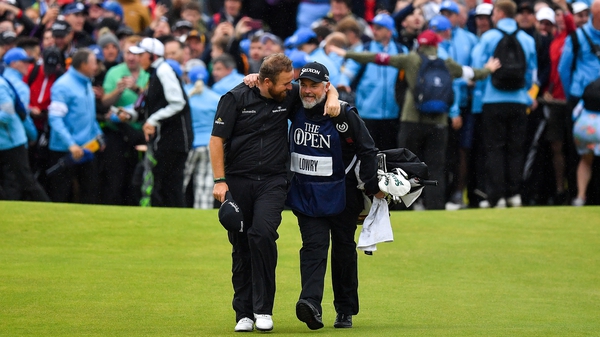 'I owe him an awful lot, and I told him coming down the last'