Shane Lowry has paid tribute to his caddie Brian Martin, who has been an 'unbelievable influence' on the 2019 Open champion's life and golf.

The Clara golfer teamed up with 'Bo' last year after ending his nine-year partnership with Dermot Byrne following last year's Open at Carnoustie.

Having previously carried the bag for Gary Murphy, Peter Lawrie, Alex Levy and Lucas Bjerregaard, Lowry said he had Martin in mind as soon as he parted ways with Byrne.

After a few weeks with his brother Alan on the bag last year, Martin was an ever-present until the Irish Open at Lahinch, when he took a week off for the birth of his son.

Speaking to RTÉ Sport's Greg Allen, Lowry gave the impression the County Down man has been central to his landmark season, which saw the 32-year-old win the Abu Dhabi HSBC Championship as well as the Open.

"Bo has been a huge part in the whole thing. I owe him an awful lot, and I told him coming down the last. He has been an unbelievable influence on me, my life, my golf and I am very happy I could share this walk with him," said Lowry.

"It is a huge deal for him. Bo is from here, he is from Northern Ireland. He is from Ardglass, only down the road. He had his newborn son up here today. It is just incredible and to be able to share that with someone you are so close to."

Lowry is now looking forward to the celebrations after unquestionably the biggest win of his career.

Lowry moves up to 17th in the world after his victory which matches his previous high in 2015. 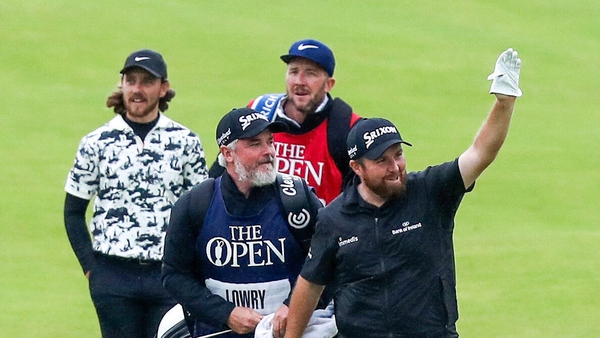 Offaly has a new 'best day' after Lowry triumph