Cormac Sharvin says he was proud of his performance at the Dubai Duty Free Irish Open over the weekend as he finished on nine-under par and the highest placed Irish golfer at Lahinch golf club.

Jon Rahm blazed a trail on Sunday to claim his second Irish title in three years, while it was a mixed day for the home players.

A final round 70 was Sharvin's poorest of the four days, and the 26-year-old appeared to be on the slide midway through his round by carding three bogeys in four holes.

However, the Down native dug deep and arrested the slide with a birdie at 14 and four successive pars ensured he tied for 15th overall.

"I felt I didn't play much different from the first three days, I just missed it on the wrong side too many times, but all in all, it’s a pretty good week," he told RTÉ Sport.

"It’s a step in the right direction for sure. It shows I can compete out here. My confidence has been pretty high, but it’s definitely going to boost that a little.

"It's my first time being in contention on the European Tour so I’m proud of the way I handled myself on and off the golf course."

Robin Dawson and Cormac Sharvin were both pleased with how they fared around Lahinch Golf club this week #rtegolf #DDFIrishOpen pic.twitter.com/JrMAjdC0Y4

Waterford’s Robin Dawson, competing in his first Irish Open as a professional, was just three shots adrift, with a birdie at the last capping a memorable week which included a 64 on Saturday.

The 23-year-old may have dropped 13 places on the leaderboard on Sunday, but still claimed a top-30 finish and a cheque for approximately €65,000

"I thought I played really nice today. A couple of things didn’t go right; my second shot on 10 went the only place on the whole golf course where I couldn’t actually hit it, but I’m happy overall and it’s been a really good week.

"It has given me a lot of confidence and shows I can play with the top lads."

'I holed a couple of nice par putts...I wasn't feeling 100% for the whole week, I came out and gave it my best’ - @ShaneLowryGolf reflects on his final round and his efforts in Lahinch this week #rtegolf #DDFIrishOpen pic.twitter.com/FSBgZeKSaC

Shane Lowry was next best of the Irish on four-under par and the Offaly man admitted it was a week that never really ignited.

"Without making excuses, I wasn’t feeling 100% for the whole week," he told RTÉ Sport. "I came out and gave it my best and I found something in my putting I didn’t have the last few days. That’s a nice thing to take away from the week. It’s nice to finish shooting two-under par."

A level-par round saw Padraig Harrington finish on one-under par, three shots better than Seamus Power who laboured to a final round 72. 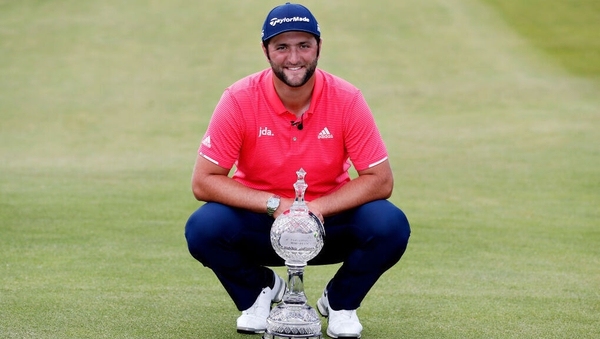