The grinding of teeth that followed the announcement early in the year that Rory McIlroy was to bypass the Dubai Duty Free Irish Open has been replaced by broad smiles of optimism this week in Lahinch where the course has been garnering rave reviews and the field assembled is actually stronger than it was in Ballyliffin twelve months ago, even without some 'Rory star power'.

Last year, Russell Knox collected not just a million dollars in prize money but also 38 world ranking points which signifies the strength in depth of the field. This year, even accounting for the World No 3’s sabbatical, there are 42 world ranking points projected for the winner on Sunday which is almost the same as the concurrent event on the PGA tour in Minnesota.

With 12 of the world’s top fifty and 29 of the world’s top hundred playing one of the great links on the island, there’s a buzz about the place indicating that this could well be among the most memorable Irish Opens in history, because there’s just something about Lahinch.

For a start, what golf course in Ireland has an 18th hole that is a two minute walk from the main street pubs and restaurants of the town. While it’s no St Andrews, it’s the nearest experience we have to the famous Auld Grey Toon on the east coast of Fife. And far from being grey, the paint brushes, the bunting and the hanging baskets on show here in West Clare have given this extraordinary golf course, which dates back to the 19th century, a long overdue and appropriate fresh surrounding.

History oozes from the folds in the land by Atlantic shore here. Old Tom Morris, the St Andrew’s-born Open Champion on four occasions who was also regarded as father of greenkeeping and course architecture, described Lahinch as the finest natural course he’d ever seen. He laid out the original design in 1895.

The West Clare Railway brought an influx of golf tourism and no little prosperity to the links in the early 20th century and in 1926, arguably the greatest of all golf architects, Alistair McKenzie, was commissioned to develop the layout at a cost of £2000.

"Lahinch will make the finest and most popular golf course that I or I believe anyone else, ever constructed." he is reported to have said.

That was no small accolade from the man who just a few years later would partner with Bobby Jones to design Augusta National.

When in 1999 Dr Martin Hawtree was employed to modernise the course, he took great care to leave the significant imprints of McKenzie and Morris while also re-designing 14 of the 18 greens and taking a number of them right to the edge of the ocean resulting in a hugely successful upgrade and a regular world top 50 ranking.

Of course, every links no matter how historic or difficult or long for that matter, needs wind to defend it from the skills of the modern professionals, especially with the equipment advances of the last ten years in particular. With little breeze forecast beyond 15 miles per hour this week the question of how well Lahinch will defend itself has been muttered frequently here over the practice days.

From the soundings of the players, it might well hold its own in defending par which has been reduced to just 70 this week with a yardage of just over 7000, which means it’s not short. But the devil is in the detail or, more accurately, in the many folds of the land here, according to Shane Lowry’s assessment: "There’s all sorts of rolls in the fairways and you’re going to get the odd bad bounce and I found the greens quite tricky to chip onto. Four of us played 10 holes and there were very few birdies."

With all links courses, no matter what the difficulty, if the wind doesn’t blow, we’ll see plenty of players significantly breaking par and the tournament host Paul McGinley believes that, even with light winds, the sweet spot for a winning score might be in the 10 to 15 under territory.

"That to me would be a tremendous week. I don’t want to make it too difficult. I don’t want the players to walk away brokenhearted thinking, God, I played really well and shot 71," he said at Tuesday’s press conference.

"We’re certainly not going to ‘trick it up’ and if we get the 10-15 under par (winning score), I’ll be absolutely thrilled".

McGinley will also be thrilled by the full-house signs going up on the week-end and projected near sell-out crowds on Thursday and Friday with the capacity set at around 25,000 per day.

They will not just have the spectacle of watching 2017 winner, Jon Rahm along with Tommy Fleetwood, Ian Poulter, Louis Oosthuizen, Matt Wallace, and Shane Lowry, but they’ll be walking on some of the most hallowed turf in Irish golf which includes two of the most ancient holes in the country - the ‘Klondyke’ 4th hole and ‘blind’ par three ‘Dell’ 5th hole - both of which can be traced back to the Old Tom Morris design.

Expect the latter of those holes to draw some of the most animated responses of the players because the green is set behind a 15 metre high mound which renders the entire green all but invisible. The hole represents how golf courses were laid out in the JCB-free 19th century when such blind shots were commonplace.

Technology though, will come to the assistance of the players as they watch their tee shot towards a shallow green, disappear over a hill 154 yards away. The Tour, in their wisdom, have put an LED screen by the tee which will show the entire shot in flight and the spot where it lands.

Who knows if Old Tom would have approved but it’s going to make for even more entertainment ahead of one of the most anticipated Irish Opens in history.

Follow the Dubai Duty Free Irish Open with our live blog on RTÉ Sport Online and the RTÉ News Now App and watch live on RTÉ2 from 10.30am Thursday. 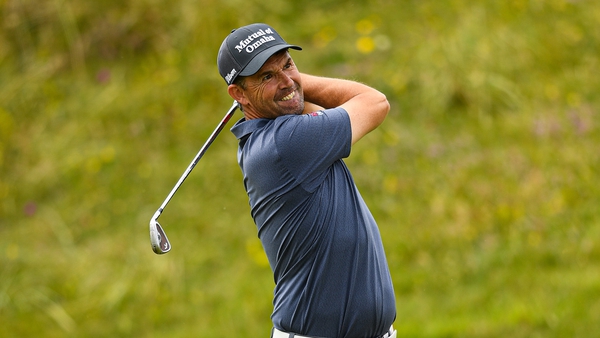