Europe produced a barnstorming Ryder Cup comeback on Friday as they swept the foursomes in devastating style to take an overnight 5-3 lead after the United States has drawn first blood by taking the fourballs 3-1.

It was the first time Europe had won all four foursomes matches - having suffered a 4-0 reverse in the format en route to defeat in Hazeltine two years ago - and their first sweep in either format since 1989.

AS IT HAPPENED - RYDER CUP DAY 1

A pairing which won all three of their matches together at Gleneagles were reunited as Europe attempted to comeback from a morning deficit and they duly delivered another point against sub-par opponents.

The American pair were five over par for the first 11 holes and although a first birdie of the round on the 13th helped reduce the deficit, Stenson and Rose closed out a comfortable win.

McIlroy made up for his morning disappointment, while Poulter bounced back from hitting his opening drive into the water to win Europe's second point of the afternoon.

After losing another hole to a birdie at the par-five third, Northern Irishman McIlroy's first birdie of the day from eight feet finally arrived at the sixth to get back to one down.

They were level when Simpson could not hole a 15-foot par putt at the seventh and when Simpson's par putt lipped out at the short eighth and McIlroy holed from four feet, Europe were ahead.

Watson missed a six-foot par putt having made a mess of the long ninth and Poulter and McIlroy turned two up having won four in a row. They never relinquished that position and eventually sealed a 4&2 win. 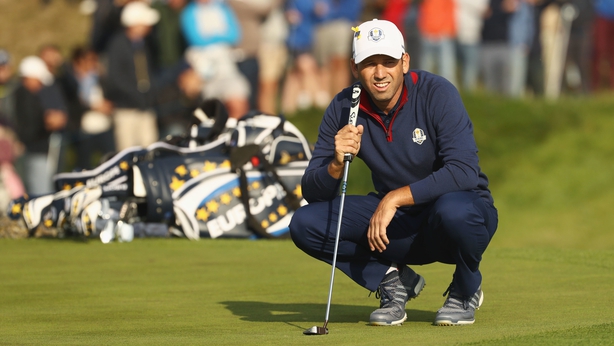 After sitting out the opening session, veteran Garcia was given the task of partnering rookie Alex Noren, albeit a rookie who won the French Open at Le Golf National earlier this season.

Par was enough to win the second hole and the European duo were gifted the next as well when Mickelson hooked his tee shot into the water, but the Swede and the Spaniard combined to birdie four of the next six holes to move seven up.

They lost the 10th after Noren drove into the water and also the 13th when Garcia did the same, but that was merely delaying the inevitable and victory was secured on the 14th.

There was double success for the Molinari-Fleetwood partnership as they returned to the course to see off the USA's top afternoon pair.

Fleetwood got things going with a birdie putt at the third and a 15-footer for par at the fifth was enough to extend their lead.

The Southport golfer found his touch on the green with a curling 12-footer at the sixth taking them three up, although he did miss a par putt at the eighth to hand a hole back.

They were four up through 10 only for Molinari to fire his tee shot into the crowd at the 11th leading to the loss of the hole. But Spieth found water at the 13th to put Europe four up and victory was secured with a Molinari birdie at the 14th. 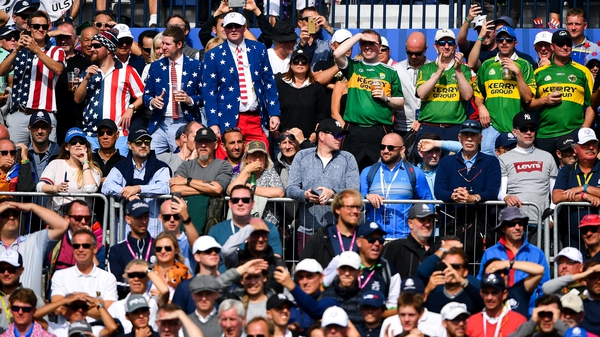