The concerns over Rory McIlroy's form coming into the Ryder Cup proved not to be without foundation as the was the only one of all the morning players not to register a birdie in the morning fourballs.

McIlroy's wedge play and putting was never up to scratch and that placed a lot of pressure on rookie Olesen, who drove his opening tee shot into the water.

They were lucky Johnson missed a three-footer to win the hole. Europe made the first move when Olesen won the short eighth with a par-three but the Dane then found water again at the ninth and with McIlroy unable to advance his ball far from deep rough they dropped the first of four holes in five to go three down and the match was eventually conceded on the 16th when Johnson hit it close.

Rose was given the task of playing the first match for the third Ryder Cup in succession and responded in a style befitting a man who birdied the 72nd hole of the Tour Championship on Sunday to win $10million. A superb approach to the first set up a tap-in birdie and although Finau chipped in for an eagle on the sixth, the American rookie drove out of bounds on the next before Rahm's birdie on the eighth doubled the lead.

Koepka's chip in on the 11th was immediately followed by an even better one from Rose, but Koepka's birdie on the 13th was followed by a massive stroke of luck on the 16th, where Finau's water-bound tee shot hit a wooden sleeper on the edge of the hazard and bounced to within three feet of the hole. Rose then found the water with his approach to the 18th and the American pair had pulled off an unlikely win.

The all-English pairing faced a daunting task against good friends Spieth and Thomas, two men who have both been ranked world number one, and Spieth made a flying start by almost holing his approach to the first.

The three-time major winner also added birdies on the third, fifth, sixth and seventh before Thomas got in on the act with a birdie on the par-five ninth. Casey birdied the ninth and 10th simply to limit the damage and made it four in a row on 11 and 12 to close the gap, before Hatton's birdie on the 13th remarkably got them back on level terms.

However, Thomas birdied the daunting 15th to edge the Americans back in front and that proved decisive. 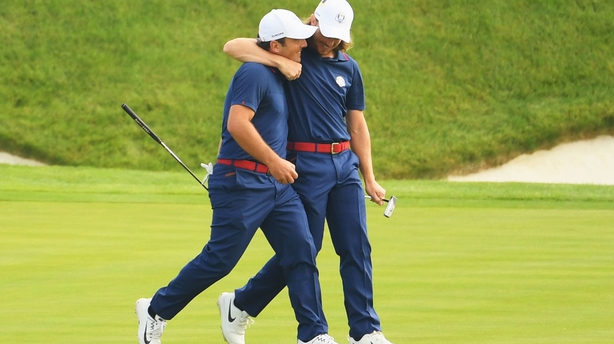 Much was made of Woods' renaissance but his play was nowhere near the level which helped him win his first event in five years at the Tour Championship on Sunday.

It began badly for the USA when Reed dumped his approach at the first into water, and Molinari birdied from eight feet. Woods levelled things up without even having to attempt a short birdie putt with the Europeans both in the same bunker.

Sand trouble for the Americans at the fourth saw Fleetwood hit an eight-iron to four feet at the fourth to put them ahead again, but they lost the seventh after failing to make par.

The long ninth also went the way of the USA after Fleetwood and Molinari both criminally failed to make par. Reed's chip-in birdie at the 10th put them two up before Molinari holed a 20-footer at the next to reduce the deficit.

At the 15th Molinari and Reed put their approaches into the water and with Woods having to lay up out of the rough, Fleetwood birdied from the fringe.

Reed flirted with the water at the next while Woods went in it and Fleetwood holed a monster putt across the green to go one up. With the American pair failing to find the 17th green in regulation, Open champion Molinari birdied from 15ft.