Ireland's prospects of winning a medal at the Olympic golf event have suffered a further blow after Graeme McDowell joined Rory McIlroy in withdrawing his name from consideration.

The former US Open champion was in position to claim the place on the Irish team that opened up following McIlroy's decision to pull out of the team due to his concerns over Brazil's ongoing spread of the Zika virus.

McIlroy's withdrawal has prompted McDowell to issue a statement via his Twitter account in which he reveals he had alreayd made the decision to skip the Games in Rio due to the impending birth of his second child.

The 36-year-old wrote: "I woke yesterday morning to the news that Rory McIlroy had withdrawn from the Irish Olympic Golf team, putting me in line for an automatic spot on the team.

"As many within golf will know my wife Kristin is pregnant and is due to have our second child just a couple of weeks after the Olympic Golf competition concludes.

"I made the decision many months ago, before I was on the team, that I would not play or travel outside the US, where I and my family live, in the weeks running up to the birth.

"Unfortunately I will therefore not be available to replace Rory on the team. I have informed Paul McGinley and the Olympic Council of Ireland of my decision."

McDowell is the latest high-profile golfer to turn down the chance to play at the Olympics, following McIlroy and other major winners Charl Schwartzel, Louis Oosthuizen and Adam Scott.

In the absence of both McIlroy and McDowell, three-time major winner Padraig Harrington is set to represent Ireland this summer alongside US Open runner-up Shane Lowry.

"The Olympic Council of Ireland (OCI) respects the decision taken by Graeme McDowell to make himself unavailable for consideration for the Irish Olympic Golf Team," said a statement from the OCI.

"It is important to re-emphasise that Graeme's decision was taken for personal reasons as Rio 2016 is a matter of weeks before the birth of his, and his wife Kristin Stape's, second child.

"This now presents a significant opportunity for another talented Irish golfer to represent his country and participate in golf's historic return to the Olympic Games after a 112-year absence.

"In particular, we are very fortunate to have a global star in Padraig Harrington who is now in contention for automatic selection for Rio 2016."

Harrington, the winner of two Open Championships and the US PGA, admits he will be honoured to represent Ireland if he is selected when the team is announced next month.

"Based on the current ranking points I am next in line for automatic selection to the Irish Olympic Team for Rio 2016," he said in a statement.

"I will work very hard over the next few weeks to achieve this selection as it would be a huge honour for me to represent Ireland at the Olympic Games, having played an active role in golf's bid to be re-included in the Olympic Games programme."

"We recognise the unique circumstances for Graeme and his family and, while we are disappointed that he is not available for the Olympic Games, we sympathise with his position," it said in a statement.

"There are many considerations for players but those who compete will have the opportunity to be part of a truly global celebration of sport." 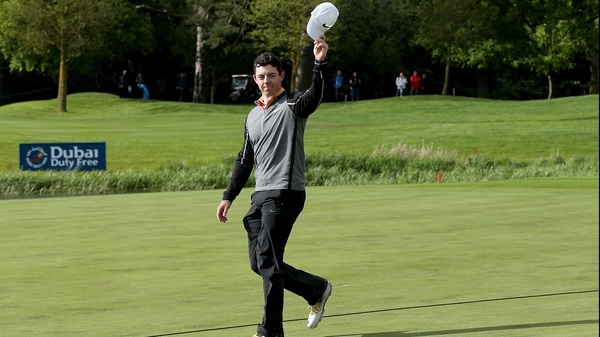