Dustin Johnson believes his US Open victory could take his game to the next level after ending a run of near misses in major championships in dramatic fashion.

Johnson's talent has never been in doubt, but his temperament certainly has after he squandered numerous chances to win some of the game's biggest events.

The 31-year-old took a three-shot lead into the final round of the US Open at Pebble Beach in 2010 but collapsed to a closing 82, while two months later a two-shot penalty for grounding his club in a bunker on the 72nd hole of the US PGA cost him a place in a play-off.

And last year at Chambers Bay the US Open slipped out of his grasp once more when he three-putted from 12 feet on the 72nd hole to finish a shot behind Jordan Spieth.

More heartbreak looked to be on the cards at Oakmont when Johnson was warned with seven holes to play about a possible penalty - subsequently applied - for causing his ball to move on the fifth green of the final round.

But fortunately for the new world No.3 - and the heavily-criticised tournament officials - the challenge of rivals Shane Lowry, Scott Piercy and Sergio Garcia faded down the stretch and Johnson ensured any penalty would not matter with only the second birdie of the entire final round on the 18th.

"It's definitely a big monkey off my back," Johnson said after a closing 69 left him three shots clear of Lowry, Piercy and Jim Furyk, who was also runner-up the last time Oakmont staged the US Open in 2007.

"I've been in this situation time and time again so I know it what to expect. I know how to handle myself. For me to finally get it done on Sunday in a major, it's a huge monkey off my back.

"It's fantastic and it feels really good for sure because I've worked so hard to get here. I've put myself in this position many times, and to get it done is definitely sweet."

Johnson had recorded four top-10 finishes in five majors since missing the 2014 US PGA due to taking a six-month leave of absence from the game to deal with "personal challenges," with Johnson forced to deny allegations in the United States of a positive test for cocaine.

Johnson admitted in January 2015 he had been battling problems away from the course, with excessive drinking the primary one.

"I've got a great support system with Paulina (Gretzky, his fiance), my son Tatum, my family, my team that's around me," Johnson added. "So it's been a great road. I'm definitely a stronger person coming out the other side.

"I'm different. I've grown up a lot. Having a son and starting a family has definitely made me grow up a lot. But I felt like I've handled myself very well in the past in the majors, just didn't quite get over that hump. I finally did." 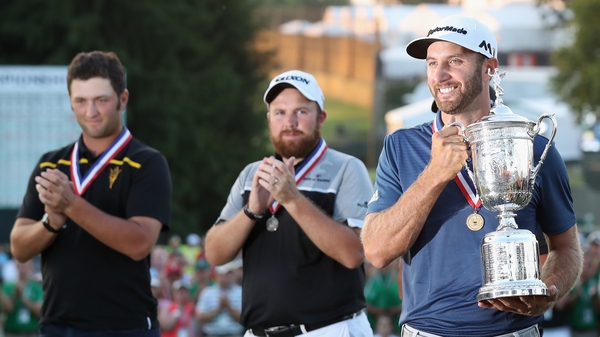 US Open was 'there for taking', admits devastated Shane Lowry