Long-hitting Dustin Johnson, seeking his first PGA Tour victory of the season, stormed into contention for the Houston Open with a scintillating eagle-birdie finish to the opening round on Thursday.

The 31-year-old American sank a 10-footer at the par-five eighth, his penultimate hole of the day, before draining a 24-footer from the fringe at the par-three ninth to card a seven-under 65 at the Golf Club of Houston in Humble, Texas.

That left Johnson just one stroke behind leader Charley Hoffman and level with compatriots Roberto Castro, Scott Brown and Morgan Hoffmann who all took advantage of calm but humid conditions ideal for low scoring.

Of the two Irish involved; Offaly man Shane Lowry shot a 72 for level par, while Dublin’s Padraig Harrington lies on one over.

Johnson, a nine-time winner on the PGA Tour, was delighted with his start after mixing an eagle and seven birdies with two bogeys.

"Overall, it was a great day," he told PGA TOUR Radio. "I made just two bogeys and one of them was a mud ball on (hole) five. I hit a good shot, just mud took it left and got a kind of a bad lie there left of the green and I didn't get up and down.

"Then I had a penalty shot on the par-five 13th (his fourth hole of the day). Other than that, I felt like I played really solid today and holed some nice putts," said Johnson, who has recorded four top-10s in seven starts on the 2015-16 PGA Tour. 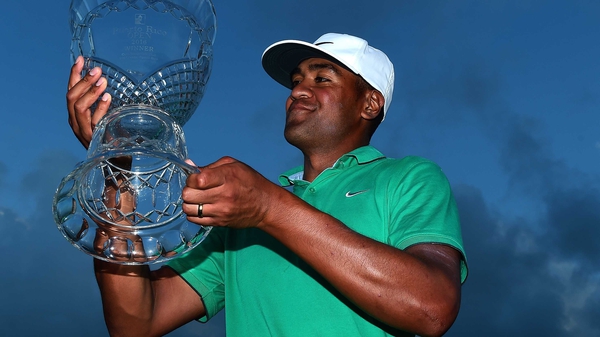