Ryder Cup star Ian Poulter failed to secure his first victory since 2012 as Tony Finau won his maiden PGA Tour title in a play-off in the Puerto Rico Open.

Poulter, who missed out on a place in this week's WGC-Dell Match Play by just 0.044 world ranking points, took a one-shot lead into the final round at Coco Beach but could only manage a closing 72 to finish a shot behind the American pair of Finau and Steve Marino.

Finau eventually won the title with his third straight birdie in the play-off on the par-five 18th after getting up and down from a greenside bunker, while Marino three-putted from long range.

One wild ride en route to a first TOUR win for @tonyfinaugolf. pic.twitter.com/Sz2ExmMfjc

Poulter, who carded one bogey, one birdie and 16 pars in the final round, said: "It's a shame. Just slightly disappointing.

"I'm continuing to work on the game to try and improve and I know if I rectify a couple of poor shots, then my game will improve. Obviously, hitting shots slightly too far right at certain times is costly."

Finau told pgatour.com afterwards: "I'm still a bit overawed, it hasn't all sunk in yet, but I played my heart out today and I'm glad I came out with the win. 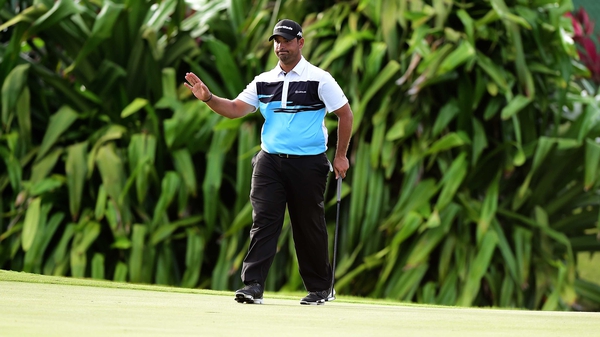